Due to The Common Man’s continued absence, posting around here was going to be lighter than usual.  But as usual, some of the best friends of the blog we have stepped up and offered their services in filling in.  Today is the first of those guest writers, the terrific Jeff Polman of Play That Funky Baseball, where, with the help of some of the best writers on the internet, Jeff is replaying the 1977 season using the addictive game Strat-o-Matic Baseball. Here, Jeff recounts the first Major League game he attended, and recreates the wonder and excitement that we all felt as little boys and girls when we initially saw the greatest game in the world played live by giants and titans.  Take it away, Jeff!

The opening memory was the Sign: Welcome to the Mass Pike, forest green, bigger than any road marker in town, adorned with a pilgrim’s hat and an arrow sticking through it. Springfield, Massachusetts may have been ninety miles west of Boston, but to me and my older brother, it felt like nine thousand. It was a Thursday, May 30, 1963, I was eight years old, and our dad was taking us to Fenway Park for the first time.

Why are we not in school on a Thursday? It must be the official Memorial Day. Actually, retrosheet.org informs me that nearly all the games played that day are day games, and that doubleheaders occur at the Polo Grounds (Cubs-Mets), Forbes Field (Phillies-Pirates), and Comiskey Park (Indians-White Sox), so it’s fair to assume this is the case.

Until then, any live baseball experience we enjoyed had been at Pynchon Park, a rickety wooden yard perched on the east side of the Connecticut River, watching the Springfield Giants of the double-A Eastern League grapple with the Elmira Pioneers, Charleston Indians and Binghamton Triplets. Following a departure pattern set by Matty Alou, Juan Marichal and Tom Haller, 21-year-old third baseman Jim Ray Hart was a big Springfield star a year ago*, but had moved on to Tacoma in the Pacific Coast League. where he would slug his way down to San Francisco, and there had been scant excitement that season at Pynchon Park. Box seats at Fenway to see the surprising fourth place Sox play the World Champion Yankees? We couldn’t even get to sleep the night before.

Going into the day’s action, the Orioles are the actual league surprise. At 30-16, the Birds of Brooks Robinson, Powell, Aparicio, Gentile and a staff of Barber, Roberts and Pappas, have a three-game lead on the Yanks and four and a half on Chicago, with Boston tied at 22-18, five games back and tied with the Kansas City A’s. Through the first two months Baltimore has a +33 run differential, but the Yanks and White Sox are at +43 and the race is sure to get tighter.

We picked up my dad’s business friend who got us the tickets in some nameless suburb of Boston. He climbed into our car with his two sons. Their name was Porter. I never saw these people again in my life or even knew what became of them, but because it was on This Day, I remembered their name being Porter.
Ralph Terry is scheduled to face Earl Wilson. Terry has won his last two starts easily, a 10-4 romp against the L.A. Angels on the 19th and a 5-1 victory in Washington on the 25th, throwing complete games each time, and after the previous night’s rainout, here he is again after four days of rest. Wilson was hammered for Killebrew, Allison, and Battey homers back on the 20th and lost a 6-5 game, then went only four and a third at Tiger Stadium on the 25th in a 5-2 loss. Both pitchers will surely be aided here by the era’s ignorance of on-base percentage. Ralph Houk puts Clete Boyer and Bobby Richardson (.295 and .294 OBP for the year) at the top of the Yankee lineup while Johnny Pesky features Chuck Schilling and Gary Geiger (.291 and .327) atop his.

We parked our Catalina in a pig pile of cars, a small, hopelessly clogged lot in a seemingly industrial part of the city. “Where’s Fenway?” I chirped, because all I could see through the droves of baseball fan pedestrians was a couple of low brick buildings that looked like tool factories.

The tool factory right in front of us with a crop of leafy trees was Fenway Park. My heart pounded. We inched through the gate, dropped down a concrete ramp and straight into a gloomy grotto of food stands, program hawkers and cigar smoke. Slogged our way to another, narrower ramp moving up…

…and stopped in our tracks to behold our first flash of major league green. Our Magnavox TV and standings page in the Springfield Republican had offered us nothing but black-and-white baseball, so the sight of the lush grass and monstrous left field edifice under a blue, early summer sky, the navy caps and red trim on Boston’s home whites, were a true revelation.

Our seats were amazing, lower first base boxes behind the Red Sox on-deck circle, and it struck me how shockingly close the stands were to the field, certainly a lot closer than at Pynchon Park. We all got Fenway Franks but Porter’s kids were never satisfied, and their father was out of his seat constantly to fetch them popcorn, ice cream and god knows what else throughout the game. Our dad, never one to spend a dime needlessly, still talks about this today.

Clete Boyer, the first major leaguer we ever saw bat, then grounded out to third, Malzone to Stuart, and the game began…

Mickey Mantle, coming off a very productive, injury-marred season in 1962, leads baseball with a 1.117 OPS on this day in 1963. After a scoreless first, Wilson fools him with a called third strike to begin the second. 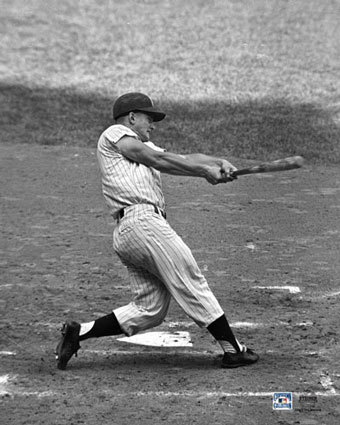 They booed the Mick and Roger Maris pretty equally, but after Mantle whiffed, Maris bashed one over the bullpens in right-center, the first homer we ever saw. I guess we could’ve done worse.

And then we went to work on Terry. Dick Stuart bombed one over the Monster after a Lu Clinton single. Russ Nixon got plunked and Eddie Bressoud hit one out. 4-1 Sox! Was it always this easy?

Terry is undoubtedly talked to, because after Bressoud’s homer he retires the next 14 Red Sox until Clinton singles with two outs in the 6th. New York, meanwhile, battles back, a single run on a force play in the 4th, before a walk and three singles in the 6th tie the game and finish Wilson for the day. Jack Lamabe replaces him, but has troubles of his own in the 7th. Dick Radatz, Boston’s best reliever, is summoned for the high-leverage situation, something rarely seen today, and summarily walks Maris to force in the go-ahead run. By contrast, Ralph Terry never leaves the mound for the Yankees.

We were down 5-4 in the last of the 9th. Terry had already gotten Stuart and Nixon out, and it was up to Eddie Bressoud. We were out of our seats screaming. The Porter kids were finishing their second boxes of popcorn. Terry looked in, wound, and Bressoud smacked one high and deep toward the Monster…

…and it was GONE! Tie game! No wonder I became a baseball addict!

Arnold Earley had taken over for Radatz in the 8th, and bats for himself after Bressoud’s homer. Pesky’s plan doesn’t work. Elston Howard doubles and Phil Linz singles to start the 10th, before Boyer hits a one-out sac fly to make it 6-5. If pitch counts are being used by anyone, they certainly aren’t being published, and I imagine Terry is well over 100 by this point, but he still takes the ball for the last of the 10th. (Houk burned through four relievers in their last game, an 11-6 loss at Fenway two days ago, so I’m sure that’s a factor here.)

Schilling flew out to left and Geiger grounded to Pepitone, so Carl Yastrzemski was our last hope. Their best hitter was 0-for-4 so far, not looking good at all, and my dad had us up and walking toward the exit tunnel as he stepped into the box. My brother and I came down with mild polio at that moment, slowed to a near-crawl, and managed to be right behind the backstop screen when Yaz took a mighty cut and missed a Terry fastball for strike three.

The ride home was much faster, as it always seemed to be. Maybe we leafed through our Street and Smith’s baseball annual or Classics Illustrated comic books. We probably stopped at one of the many Mass Pike Howard Johnsons for dinner, but I don’t remember what I ate. Forevermore, my strongest memory was the fresh air and color of a major league game.

I have occasional discussions with various friends about our favorite moments from Peter Jackson’s Lord of the Rings trilogy. Usually it’s a battle scene or Gollum’s schizophrenic soliloquy, but for me it’s always a different one. The Two Towers opens with a harrowing plummet down a mountain shaft between Gandalf and the Balrog, the creature’s fiery whip and Gandalf’s staff and sword snapping and clanging at each other in an adrenalin rush. Suddenly Jackson pulls the camera way back, and all we see is the distant flame of their battle as they drop into a humongous, water-filled cave. It is this perfect balance between intense detail and the broader, epic view that makes Jackson’s film so marvelous. Similarly, it is the perfect balance between baseball’s statistical minutiae and its unforgettable vividness that makes it the best game on this planet. If I’ve learned one thing, it’s that baseball stats and wonder go together like a hot dog and mustard.