OK, The Common Man will bite. He’s a sucker for when Rob throws out one of his mysteries (first George Strickland, then Ted Abernathy, now this), and yesterday he started wondering about Gene Bearden, a rookie sensation for the Indians in 1948, who won 20 games and quickly faded into obscurity. Rob writes, “Most knuckleball pitchers age well. Bearden peaked as a rookie.” According to the stories passed down by Eddie Robinson and others, Bearden lost his effectiveness when batters began laying off his knuckler, but Rob’s not having it, “By my count (because there’s no source for it), Bearden gave up a .245 batting average on balls in play in 1948. That seems like an exceptionally low figure, even for a knuckleball pitcher in 1948…. He was blessed with good luck in that one season.”

So how much was luck and how much was Bearden? Did he really fall off because other players got wise to his knuckler?

Bearden got an exceptionally late start to his Major League career. He bounced around the minors for four years before being drafted into WWII. He saw combat in the engine room of the USS Helena, when it was hit by Japanese torpedoes in the Pacific. Bearden suffered massive injuries, including a broken skull and a “crushed knee.” He received steel plates for his cranium and steel pins for his knee, and after several operations, he made it back into baseball. The Yankees, who owned his contract, were concerned about his long-term health, and dealt him to the Indians for Sherm Lollar.

Bearden had had a lot of success in the minors before he broke camp with the Indians in 1948. He tended to average under a hit per inning, and walked between 3.6 and 4.0 batters per nine innings. He struck out roughly the same amount. But his ERAs were low and he proved effective both in swing roles and as a regular contributor to the rotation. But by 1948, he was a gimpy, soft-tossing, 27 year old lefty who had given up three runs in his only appearance, which had lasted just a third of an inning.

He still came north with the Indians, and became one of their rotation stalwarts. In addition to winning 20, he led the American League with a 2.43 ERA and completed 15 of his 29 starts. He also walked 106 batters (4.2 per 9) and struck out just 80 (3.1 per 9). After he won his last six starts (with 5 complete games and two shutouts), manager Lou Boudreau made him a surprise pick to start a one-game playoff against the Red Sox on one-day rest. He pitched a complete game and picked up the win. He also excelled in the World Series, pitching a shutout and 1.2 innings of scoreless relief. After the season, he was named the most courageous athlete of 1948 by the Philadelphia Sportswriters Association for making it back from his injuries in the War.

Things were also looking strong at the start of 1949, as Bearden won his first three starts, giving up just 20 hits in 27 innings. But it didn’t last. A 1982 Baseball Digest claims, “he pulled a hamstring the next spring and tried to come back too quickly. It became a chronic problem, [Bearden] says.” Contemporary accounts confirm he was hurt. The AP noted in May that he had “been suffering from a pulled leg muscle, [and] showed last night that he was not yet himself. Plainly favoring his injured leg, the tall lefthander lasted seven innings and was clipped for 16 hits.” And Baseball Digest listed him among the “casualties” of injury in 1949 that October. 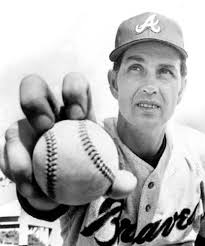 Somewhere along the way, he does seem to have lost control of his knuckler, and perhaps the injury played a part in that, though contemporary accounts don’t embrace that explanation. Instead, they blame Bearden for not having a viable alternative for the knuckler (and by extension, the knuckler, for encouraging pitchers to rely on it so heavily).  A 1950 Baseball Digest profile notes that, “Early in 1948 it was agreed he lacked the basic tools. He didn’t have a big league fast ball nor a big league curve. He had a baffling knuckler, but Boudreau and his coaches doubted that it was enough. For that one year they were wrong, but were right in the last analysis.” Indeed, when it went, “He was wild. He couldn’t get his knuckle ball over the plate, and when he was obliged to come in with the fast ball and curve they murdered him. But no one has ever explained why he was impossibly wild with the pitch he had controlled perfectly in 1948.”

Satchel Paige (one of Bearden’s closest friends on the World Champion Tribe team), in 1954, agreed with this analysis, telling the LA Times (via Baseball Digest),

“What’s the use of havin’ a fancy pitch you can’t control? That’s what ruined Gene Bearden. He had a whopper knuckleball, but he had to throw it for the heart of the batting zone and then it would break down low. So Stengel just ordered his batters never to swing and Bearden couldn’t get anything over the plate. You gotta be able to find that plate all the time.”

And in 1964, teammate Mel Harder echoed, saying “It took the league a year to learn to lay off that pitch, so that Gene would fall behind and have to throw his fast ball.  Gene didn’t have enough to win without that knuckler.” 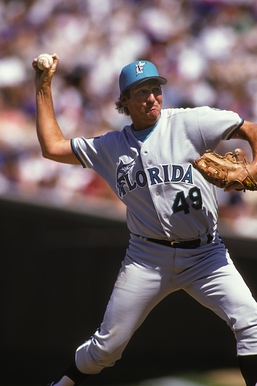 The switch from a lights out knuckler to a well below-average fastball would account for a lot of the problems Bearden had with balls in play. Like modern knucklers, Tim Wakefield, Charlie Hough, and Phil Niekro, Bearden had nothing to fall back on, and his “fast”balls must have looked more like beach balls to AL hitters. Indeed, his walk rate did jump (to 5.3 BB/9 over his final 5 seasons), and so did his hits per nine innings as batters feasted off of weaker offerings. Meanwhile, his K/9 improbably fell even lower.

So, as Rob’s headline asks us, what did happen to Gene Bearden?  On the one hand, Rob’s probably right that luck played a large role in his success in 1948. Bearden had never had a H/9 so low in the minors, and that does scream out fluke. But the difference between that and his true ability is not enough to explain how a pitcher who had good success in the minors and in a season in the Majors fell off such a cliff.

While we can’t be certain, it’s likely that Bearden’s knuckler was a strike often enough in 1948 for batters to chase it regularly and make weak contact. If he had been able to continue pitching healthy, he could have had a Hough or Wakefield like career, servicably pitching forever as batters flailed at his floater.  When he hurt his leg, surely his recovery was slowed by his War wounds, and in coming back he may have made mechanical adjustments to compensate for the extra discomfort, which ultimately threw off his control, and made him unusable as a Major League pitcher. A sad end to a war hero’s career.