We continue alternating picks in Rounds 2 and 3, but each MLB team gets to pull back three additional players at the start of each round.  The full protected lists are up here.  Bill’s Portland Webfoots get the first pick in each round, alternating with The Common Man’s Brooklyn Hipsters..  If you need to be reminded of who we picked previously, please click here.  And if you need a reminder about who is eligible, click here. Or jump straight to where ESPN’s Keith Law evaluates our picks (and the protected lists), over here.

Bill: Thames has been crushing it for two years in the minors, and has held his own in his brief big-league trial so far. He’ll compete with Duda and Reddick for a corner outfield spot, though Reddick has played a lot of center in the minors and is the closest thing we have to a CF so far.

TCM: Romine doesn’t profile as an elite catcher, but is looking pretty good at AA Trenton this year. We’ll let him develop at AAA for at least half a season.

Bill: If Francsico and his tremendous girth can stay at third, he’s a power-hitting starter who probably supplants Josh Bell (but could use a defensive replacement). If not, he’s a good left-handed bench bat or possible DH.

TCM: Stewart has been buried by Jim Tracy in Colorado. He’s probably never going to be the elite star that the Rox hoped for when they took him with the #10 overall pick. But he needs to be with a team that will let him just take and rake like he wants to. Welcome aboard, Ian.

Bill: Former top prospect derailed by injuries, which is becoming my specialty. He’s been good lately, though, and is probably a #4 or #5 starter right now, and there’s always the chance he bounces back and does something more.

TCM: Miranda’s not a prospect, but he’s hitting in his first real chance in the desert. We’ll give him his second real chance in his second go-around in Brooklyn. A Miranda/Morse platoon looks pretty good at the DH spot. 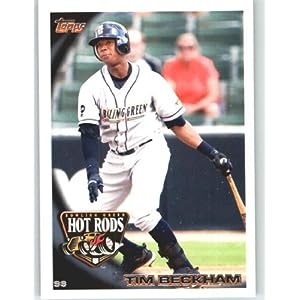 TCM: This pick should have been for James Shields, but TCM got distracted by the shiny prospect who is a former #1 overall pick, who is still just 21, and is showing life at AA this year.

Bill: Worley, 23, has been great as a starter for Lehigh Valley, and very solid as a swingman for the Phillies. How we use him in Portlandia will depend mostly on how the rest of the staff shakes out, but I’m sure we can find a spot for him.

Bill: I felt pressure to take a true center fielder and I’ve always been intrigued by Schafer, who was one of the top prospects in the game a few years ago. Of course, he hasn’t done anything to justify that hype since about 2008, but he’s also still just 24.

TCM: Flowers keeps getting pushed down the depth chart, and for AJ Pierzynski no less. He’s our de facto starter until he can’t handle it.

Bill: TCM has been taking trade chips all along, and this is really my first one. Reynolds is signed reasonably through the Webfoots’ first two seasons, where he’ll start at DH, strike out a ton, hit 30 homers a year and play just enough 1B and 3B to keep teams convinced he knows how to use a glove.

TCM: Unlike the rest of the Pirates’ starters, Karstens has seen his K/9 rise. Meanwhile, his BB/9 is at its lowest rate ever and he has a 2.66 ERA. Has Karstens finally figured it out? We’ll find out.

Bill: Pretty similar to the Schafer pick above, in that Saunders was once a good prospect and has fallen on some hard times. Still very young and talented, though, and he and Schafer will both get plenty of chances to start in center for this team, if only because the pitchers (led by flyball master Braden) might revolt against a Duda-Reddick-Thames outfield.

TCM: Lilly is a league-average pitcher who is under contract for only two more years. He’s got a full no-trade clause for 2012 and 2013, but we’ll guess he’d be willing to waive it to get away from an expansion team.

Bill: He plays a little of everything on the infield, and plays them well, and should be able to hit a little too. Navarro will be our utility guy unless and until starting shortstop Eduardo Escobar proves his bat can’t play every day.

Bill: We needed a backup catcher. He’s raking in high-A right now, but he’s old for the level. We’ll promote him to start 2012 and just won’t expect too much.

TCM: Adams has banged his way to AA at just 22, and has hit .357/.397/.685 with 17 homers so far. He has almost no plate discipline, so he’d have to maintain his ridiculous batting average to be productive.

Bill: There is almost literally no one I wanted from the Cubs. Carpenter at least throws hard and gets strikeouts, though he’s having some major control problems right now. He was promoted to the bigs and made his MLB debut a couple weeks ago, despite a 6.41 ERA and 17 walks in under 20 IP at AAA. Your Chicago Cubs! Anyway, he has the potential for more, but as of now, he’s probably our mopup guy.

TCM: Like Eppley, Kohn has struck out a ton of batters (13.4 K/9) and has a 2.04 ERA across four seasons. Unlike Eppley, he walks a lot of batters (though not a huge amount for a reliever) and he throws hard with a good fastball/slider combo.

Bill: Just too intrigued by this guy (thanks largely to Kevin Goldstein and Jason Parks’ BPro podcasts) to pass him up. A second baseman generously listed at 5’7”, he’s currently hitting .399/.435/.601 through 78 games between high-A and AA. There are a ton of 2Bs and 3Bs ahead of him on this team right now, but none that can’t be moved if Altuve keeps producing.

TCM: Wood seems to have not been healthy since being drafted in 2009, pitching only 7.1 innings over two seasons. This year, he has been healthy and has struck out 42 batters in 36.2 innings in his first exposure to AA. This is a total prayer.

Bill: He’s probably more likely a reliever at the big-league level, a little guy who throws hard and, while he’s having some control issues right now, posted a very solid 112/36 K/BB ratio in 2010.

TCM: Cohoon is a control freak and can miss a few bats, but has struggled in his exposure to the upper levels. Had to pick a Met sometime.

Bill: Sidearmer who can probably be the situational righty set-up guy right away.

TCM: We get Ziegler, a perfectly good reliever, for three years. We could presumably also move him. Options!

Bill: The system needs a third catcher. Kevin Goldstein calls Sanchez “an intriguing catcher with gap power and plus arm,” and that’s good enough for me. Sanchez is a couple years away, and even if he develops will probably be trade bait, since I expect Rosario to become a star.

TCM: A big, tall righty slowly cranking his way through the Twins system. Decent K/9, decent BB/9. Decent results. Sure, why not?

TCM picks up another couple pitchers to fill out a veteran rotation, with the anticipation of moving them over the course of 2012 for additional prospects.  He also continues to target young veterans who have fallen out of favor in Stewart, Miranda, and Flowers.  In Round 2, Bill starts to pick up players that can fill roles in 2012 in Thames, Francisco, Reynolds, and Worley.

Bill: Another guy for the SP4/SP5/long relief mix. He’s a quality big-league pitcher right now (when healthy), and is controlled through 2016.

TCM: OK, so maybe Flowers doesn’t have the starting gig all wrapped up. We’ll make it a competition. Who holds down the fort until Romine is ready? Hopefully, Flores can finally be healthy.

Bill: Like TCM last round, I totally blanked on James Shields here, forgetting he was still left unprotected after the first round (when Upton was the obvious pick from the Rays). I’d rather have Shields, but I like Brignac, another one who was a top prospect not so long ago and a useful big leaguer last year (not so much in 2011). Probably a resuscitate-and-trade, with so many other candidates for 2B and SS already in the system.

TCM: We don’t need a “Proven Closer” in his last season before free agency, but someone will. Maybe the Twins will trade Aaron Hicks for him.

Bill: Yep, another second baseman. Havens has elite offensive talent (for a second baseman) if he stays healthy, but that’s a huge if.

Bill: You may remember Alderson as the Giants’ first-round flameout of 2007. The Pirates have converted him to a setup guy, and the results have been great so far.

TCM: Is he the victim of bad luck and small sample-sizes, or is he a AAAA hitter? Let’s find out for sure.

Bill: It being my last pick in the whole draft, I couldn’t resist. Joba just has too much talent. He won’t pitch again until at least the start of 2013, and he’ll be a free agent after 2014, but even the one year at full strength in 2014 (as either a starter, which I still think he should always have been, or a dominant reliever) is enough for me to take a chance on. That’s the earliest I think we could ever dream of contending, anyway.

TCM: It’s hard to tell if this pick will fly under the rules or not. When the last expansion draft was held, Ichiro Suzuki, and the rest of the Japanese players who have come over, were not yet in the league. And Hideo Nomo had been around long enough that he wasn’t eligible. Nishioka also represents a huge question mark. Can he play shortstop at the Big League level? Can he actually hit? Given that we don’t have to pay the posting fee, like the Twins did, we’ll take the chance, assuming this last pick is legit.

And so we finish it out.  TCM takes a calculated risk in bringing in Davis and Nishioka, and gets an underpriced reliever on a one-year commitment who should be a valuable commodity.  Bill continues to hoard second basemen and pitchers who are on the DL for the forseeable future. Here’s a look at all of the draft picks in order.

How did we do?  Well, we’d like to know what you think, but we also wanted to get an objective, professional opinion.  So we asked ESPN’s Draft and Prospect Guru, Keith Law, to share his thoughts on the draft and who “won.”  His response is here.