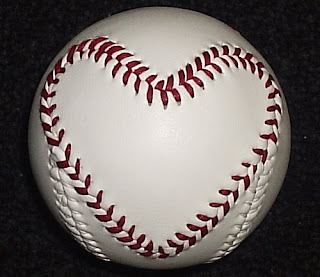 To wrap up our “Why I Love” week of warm-fuzzies (see ’em all here), we asked our staff a to write a few paragraphs on a really simple, intentionally open-ended question:


“What is the one baseball-related thing you love the most, and why?”


So before we get back to being hateful bastards, here are each of our flowery sissy-pants answers to that question. Believe it or not, I went to the list randomizer on Random.org, typed in each of our names (plus Dan Hennessey’s, who wrote a great guest post for us last week and will be popping in for at least a couple more), and it came out in the following order:

Mark
I love that it happens every day (at least in season). Regarding football, you wait all week for one game, and chances are that it lets you down somehow. Basketball and hockey play every once in a while, but the schedule is so scattered that you have to pay special attention so that you know when the game is on. That’s not the case with baseball. It happens essentially every night, and even if your team isn’t on, there are at least 7 or 8 other games on. One bad night? No big deal as there’s another game the next night. And although this doesn’t really “matter”, it’s the sport that most resembles normal life. Everyone has to go to work essentially every day, and there’s a daily grind that you can associate with. We all get our nicks and scratches and just have to deal with it, and baseball players accrue these as the season goes on. I suppose that athletes in other sports have the same, but they can take days off that don’t hurt the team because they aren’t playing. Finally and a bit on the sabermetric bent, 162 games minimizes the small sample size issues that other sports, especially football, have. Teams have to play everyone, and there aren’t schedules skewed to favor certain teams. Every day, baseball players have to go out there and play everyone else, and as a baseball fan, it’s just awesome that it’s always on.Honorable mentions: Fredi Gonzalez, Michael Young, Nomar Garciaparra broadcasting … Oh, this was supposed to be positive, wasn’t it?


Jason
Referring to baseball as the most individual of the team sports is a shopworn cliche, but of course sayings become overused for a reason. That individuality extends beyond the action on the field, though, and to the very shape of the field itself. What I love, in other words, is that every field in baseball is different to a degree that simply isn’t possible in other sports. Sure, Tal’s Hill is absurd, but I have a sneaking suspicion that we’d think the Green Monster was absurd too, had it been built in living memory.

At the risk of going to this well too often, our fields express our defiant American individualism, our occasionally forced, frequently reckless, but in the final analysis charming need to differentiate ourselves from our fellow man, to claim a psychic space that belongs solely to us. Ugly as the baggie in Minnesota used to be, it physically occupied that psychic space and stared down all comers, daring you to mock it for being different, reveling in that difference. Each and every field in baseball, especially in this post-concrete-circle stadium-building era, expresses these traits, and thus illustrates the essential greatness of baseball, the grandest game there is.

Bill
Not to be all mom’s-basement sabergeek nerdboy here, but I love that there’s always new stuff to learn and know. What people know about football is always changing, but that’s because football is always changing — new equipment, bigger and stronger and faster players, new rules to pump up the offense (there have been some pretty interesting advances in advanced statistical research there, too, but their job is a lot harder, with a moving target). Pretty similar story (though not at quite the same speed) with basketball and hockey.


Baseball, on the other hand? People say that one of the great things about baseball is its constancy…and that’s another one of those cliches that’s absolutely true. There have been all kinds of facial changes, but the basic game is the same as it’s always been. Yet, 135 years in (and with a pretty drastic acceleration over the last 20 or 30), we’re still constantly learning new things about how the whole thing works. How great is that?


Ten to twelve years ago, when I first kind of got clued in (through Rob Neyer) to Bill James and the whole world of sabermetrics, it was amazing the kind of stuff you could learn. And there really was some interesting, exciting stuff going on. But know what else? We were also, in retrospect, really stupid about some things! We thought defense was terribly overrated, mainly. Now, OPS is regularly cited on TV broadcasts (something we seriously used to dream/joke about ten years ago), and there’s all sorts of other exciting stuff going on, and you can learn all about defensive metrics and fielding-independent pitching and, now, pitch types and catchers’ framing and pitch-calling skills…and we’re probably totally wrong on half of it, and will look back in another ten years and laugh at ourselves.


But that’s part of the fun, and on balance, things keep moving ever forward. There are hundreds of things I love about baseball, most of them less nerdy than this, but right now, the constant learn-and-evolve process feels like number one.


TCM
Some friends of ours have a terrific blog on the ESPN network, You Can’t Predict Baseball.  It’s true, and it’s what The Common Man likes best about baseball.  We can make all the prognostications we want, but it doesn’t change the fact that, on any given day, any team can beat another.  And any player, even Drew Butera, Jeff Mathis, or Delmon Young, can play the hero.  Some days, Jason Marquis can outpitch Clayton Kershaw.  Some days Albert Pujols grounds into three doubleplays.  No matter how dire the odds, or how certain we are of what will happen, uncertainty has a funny way of creeping back in and making us all look foolish.  No matter how smart you are, no matter how well you understand the game, you can’t predict from inning-to-inning, from at bat-to-at bat, or even from pitch-to-pitch what is going to happen with anything resembling 100% accuracy.That’s glorious.  It fills every game with possibility, and it makes every day a great day for baseball.


Dan
A couple weeks ago I wrote an article about some of the reasons fans love baseball.  Of course, there’s no wrong answer.  I love pennant races, young players breaking in, veterans chasing milestones, everyone looking for a ring.  I could spend hours talking about the ’95 or ’97 or ’05 or ’07 Indians, all of which broke my heart in different ways.  But really, when I think about “baseball,” I think about playing, not watching.  I think about T-ball and coach-pitched games, when I learned about great baseball strategies such as “first base is to your right” and “do not throw the ball at runners.”  About moving up to hardball and donning the tools of ignorance for the first time, immediately falling in love with the idea of catching.  About all the friends on my teams throughout the years, and, selfishly, all the individual moments when I shined.  About finally winning my first championship when I was 17, after 10 years of playoff losses.  All that said, my lasting memory though will always be my dad with his scorebook coaching at third base, my mom sitting behind the dugout with other parents, and my brother sitting next to me on the bench.  I don’t think any Tribe season will ever top that.