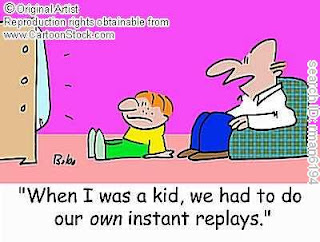 By Mark Smith
I’ve gone back-and-forth on how I feel about instant replay. Initially, I thought it was a complete overreaction to a couple New York home run calls on national TV (still do), and I figured everyone was just throwing a fit over nothing. We’ve had missed calls in the past, so what’s the big deal? But smart people made the argument that we shouldn’t be okay with missed calls just because we have before. If we have the technology, we might as well use it. And I gradually began to see the merit in using instant replay frequently, and that it wouldn’t slow the game down any more than coaches arguing and umpires conferring. In any matter, having instant replay only for home run calls is the most ridiculous move baseball could have made.
But lately, I’ve begun to wonder more about instant replay. I’m not trying to be a contrarian, but I’ve started to wonder about why we want it, if we need it, and if it would accomplish anything of substance. What follows are two arguments. The first is how I feel about instant replay and its use in sports. The second is how I feel about instant replay, sports, and how it fits in the current social context. I promise it will make more sense … I think. 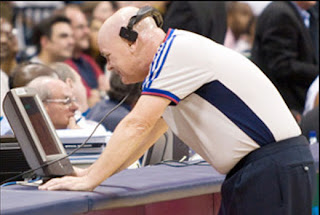 So there has to be another reason we want it, and the answer is legitimacy and fairness. Simply put, instant replay ensures that the game comes down to the performance of the players on the field and is not subject to the whims of umpires. It sounds really good, but let’s stop kidding ourselves. We don’t want equality and fairness. We don’t want our team to get screwed (less cynically, we want what happens in front of us to match the call). Look at instant replay in football, we cheer instant replay when it fixes a bad call, but we frequently beg our teams to run up to the line and snap the ball to avoid one that might hurt our team. For the fans who do cheer for the right call to be made despite its effect (there are plenty of these, though I wouldn’t near a majority of sports-watching fans), remember that instant replay doesn’t get every call right, and depending on how it’s done, it can become a part of strategy that prevents questionable calls from being looked at (like the NFL and the flags). It does improve the legitimacy of the game, but it does not prevent the umpires from having an effect, especially as they will have to interpret how to handle overturned calls.
But do bad calls really call the game into question? Theoretically, they certainly do, and there’s even a protest rule in place. But when it comes to our perception of events, it does not. I’m sure many calls have gone wrong in past seasons and World Series, but no one ultimately questions the result. Matt Holliday’s slide into home that really wasn’t affected an entire post-season, but we don’t really care. And if we really believed legitimacy to be an important part of the game, we would do something about it, namely stop going to games. But adding some instant replay didn’t boost attendance, and adding a full slate of it won’t bring more fans. And I doubt not having it at all would cause a decrease in attendance. It hasn’t yet. Basically, that means that instant replay isn’t something necessary to our loyalty to the game.
Having instant replay would affect the game (calls, results, etc.), but it wouldn’t really affect how we feel about the game. We won’t sleep better at night about it. We won’t look at division winners or World Series champions any differently. Most of the time, we forget about those plays a few days later anyway. We aren’t concerned about legitimacy or fairness. We’re concerned about having the call meet the reality before our eyes.

Instant Replay and It Fitting into Current Sports Society 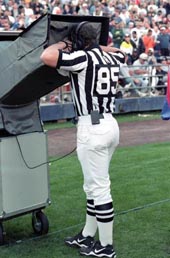 But that isn’t a bad thing, in all honesty. Calls should really match what happened on the field, and with the ability to use instant replay, it makes sense to make use of it. With most sports using it, baseball seems to just lag behind, and it appears to be holding on to one tradition while it massacres others (Wild Card, DH, All-Star Game) in the search for more money. The main reason it seems that instant replay isn’t implemented is because, while it certainly won’t make money, it will cost MLB to implement it, and if you don’t think they don’t understand what I said in the above section, you’re insane. Selig and Co. realize it’s not that significant to our viewing experience to make the investment. We pretty much understand that, and adding that the umpires aren’t getting the call right, it makes it so much worse.
Given that climate, instant replay is really inevitable, and while Selig may have meant the boundary calls instant replay to stem the tide, he really cracked the levy. Once you’ve started the process, it’s pretty much going to happen unless it’s a blatantly bad idea, which instant replay certainly is not. If Selig really didn’t want it to happen, he shouldn’t have done anything. But with the other major sports using it, instant replay was just a matter of time anyway.

And that isn’t a bad thing. I won’t complain about the implementation of more replay. While it won’t be perfect, it will improve the accuracy of calls, and in that case, the game will be more indicative of the talent of the players on the field. And though it won’t improve the entertainment of the game, it shouldn’t hurt it, either. So in the grand scheme of things, it improves the accuracy of calls and makes most fans feel better while having a only a negligible amount more than a negligible chance of altering my entertainment value in the game. As for having robots be the umpires, it would certainly be weird for a while, but we’d get used to it. And it’d be hilarious watching Ron Washington trying to work a touchscreen while trying to communicate with the robots.

But what really gets me about the instant replay business is how people think it will “fix” the game. It won’t. It will alter it a little. A few games, a few World Series, and a lot of calls will be affected, but we won’t enjoy the game anymore. We won’t feel the Cardinals being a more “legitimate” “champion” just because no poor umpiring calls impacted the outcome (maybe). We won’t look back at history and think, “I’m so glad I don’t have to adjust his performance for those bad calls.” It will make a difference, but it won’t make a difference. Did that make sense? But I’ve argued enough times about lineup construction, sacrifice bunts, etc. to know that peace of mind does mean something (though I’d argue that those are controllable events whereas replays are not, but whatever). Principle does mean something. And there really isn’t a great argument against instant replay other than it’s unnecessary. But lots of stuff we have are “unnecessary”, but we have them because they make us feel better.