2012 marks the end of my baseball card collecting era.

Baseball cards are the only thing I collect, actually. I had a vinyl record collection that I got rid of after the fifth time I moved and got tired of lugging crate upon crate of albums with me. I had an impressive book collection, but I donated the majority of them to a library charity in New Orleans after Hurricane Katrina. I keep my possessions to a minimum: too much clutter makes me anxious and I don’t have a real attachment to any of my possessions.
Except for the baseball cards.
The baseball cards started as a bribe to keep my room clean as a child. As with most things in the Angi household, there was a huge focus on competition. My sister and I are close in age and though we have different interests, everything was a competition to see who could be better. Though she could beat me at a foot race, I would crush her at Horse. She would win at speed reading, but she could never compete at things that involved creativity.
Perhaps the stiffest competition in our house came with reward: the room cleaning contest. Whoever kept their room the cleanest would get a prize. Usually it was a few dollars. Sometimes it was banana lip-gloss (which is still my favorite). But on a day that my sister won, the prize was a pack of baseball cards.

Sure, we had seen baseball cards before. My dad had a stack in his bureau that if memory serves were just Cincinnati Reds players. I’d often ask my dad if I could see those cards, and he’d produce them from the upper right corner of the top drawer, flash the Pete Rose rookie card in my direction, then tuck them away for safe keeping.
I stole my sisters’ baseball cards on the night that she won. She had opened the package, shoved the entire stick of gum in her mouth without sharing, and set aside the pack as if the cards within were just a pedestal for the stalest piece of gum in existence.
And since I figured she wouldn’t miss the cards, I took them. Once I was alone with the contraband, I studied them.
Intently. Feverishly. Exhaustively.
I never slept well as a child. I have always had this nervous and anxious energy about me. I was afraid of monsters, robbers with face-masks, and the neighbor boys who taunted me with NERF guns. On nights when I could not sleep, I would sneak into my closet, clear a space on the book shelf, and sit there playing with the contents there within.
There were nights that Teddy Ruxpin would read me stories while I played with the baseball cards that I became so enamored with. I read the numbers on the back, which somewhat ironically for someone who is now well-versed in sabermetrics, though they were very meaningless to me at the time. But I also studied the photos. I learned their postures and emulated the behaviors. I kept the catchers in a separate stack, because my father was a catcher and he was grooming me to play catcher, and I wanted to see how every catcher crouched behind the plate. And though the cards were just a snapshot in a much greater context, the stands, equipment, even the sun beating down on a players’ brow could all be filled in with imagination: that was the beauty of the card.
As my collection grew, my father helped me organize them in binders. When the binders were full, we filled boxes. And on days when I was nervous, I would flip through those books and just absorb myself in their constant nature.
Somehow in all of our moving, I became separated from my cards. I can remember boxing them in the basement of our home in Georgia and I have not seen them since. Perhaps my parents got rid of them and would not admit it, or perhaps they are still tucked away in an unmarked box ready to be unearthed later, but the cards of my childhood are gone. And it’s my own fault, really. At some point, I lost interest and became with other endeavors: playing sports, writing, and boys.

In 2002, I was at the mall with a group of friends in December. The mall had several kiosks focused on specialized holiday gifts. As we walked by, one card caught my eye: there was Chris Sabo, in begoggled glory, glaring at me from his plastic sleeve on the table. And the emotions of seeing a card I recalled from my childhood hit me like a wave…and I had to have it.
I went through several boxes on the table that were labeled with the years I had collected as a child and remembered the faces, postures, and even mustaches I had admired as a child. As I explored I recalled that Fleer cards had a different texture than Topps, and that sometimes Upper Deck cards separated on the corners, showing their corrugated layers.
Since that day, I started collecting in secret. After all, it did not seem like a rational hobby for a college freshman to enter the dorm with a box of baseball cards, but they were there. The book store just off of campus had quite the selection, and any time my parents sent me a check I would use part of that money for Pall Malls, cheap bourbon, vinyl records, chinese takeout, and baseball cards.
Even today, there is a certain rush that comes with opening a pack. I have opened so many that I have perfected the art of opening a pack in such a way that they cards can slide back into the plastic until there is time to catalog them. I realize that baseball cards have no real value, especially the new ones, yet I still get an irresistible urge to open and analyze a pack.
In 2007, I said that I would stop collecting. But on a trip to Florida I stumbled upon unopened packs from 1986 (Fleer cards) and purchased four of them. And as the proud new owner of Robin Yount, Kirby Puckett, and Wade Boggs cards, I knew I made the right decision.
Since 2008, I decided that I would find a pack of vintage cards to open every Opening Day, and a hobby box of Topps Classic.
But the 2012 cards of Topps Classic will be the last of the new cards I purchased, and I truly mean that.
Ever since Topps monopoly began as the “Official Card of Major League Baseball” they have really jumped the shark on card quality, creativity, but especially photo-selection and editing. One would assume that the improvement of technology would lead to a better baseball card, but they seem to be on the decline at a rapid pace.

Baseball cards of the past followed a formula. There were head shots, fielding shots, pitchers in motion, and batters in action. And that was it. Anything beyond that were reserved for extremely rare cards like team cards or World Series cards.
And that formula works and those cards became memorable for other reasons. There’s no need to see Oscar Gamble in the outfield when you could have a head shot of his afro pouring out of the sides of his cap. The same can be said for Rollie Fingers and his mustache.
But the 2012 Topps are an amalgamation of many things, most of them wrong. When I opened my first package of cards this season, I studied them as I often do and couldn’t help but thinking: surely some of these are a mistake. 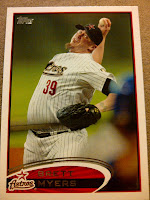 For instance, the Brett Myers card shows him in the middle of his pitching motion, close to his release point. However, from the angle that the picture was taken, the blurred figure in the batters’ box is displayed with the bat reflecting as a blurred line across the card. Perhaps it is artistic licensing, perhaps the editor thought it was an interesting photograph, but the blurred presence in the front is a distraction, to say the least.
Josh Reddick’s card shows him in celebration with teammates after his walk-off hit on August 8, 2011 against the New York Yankees in a 3-2 victory at Fenway Park. While the photo is interesting, I can’t help but feel like it’s false advertising: save the celebrations for the World Series games, not a backup outfielder.

Perhaps the strangest photo choice this season is Skip Schumaker’s card which features just his right foot and the notorious “rally squirrel.” While there is another card of Schumaker in the set that features a baseball player instead of a rodent, I can’t help but feel irked by this card’s existence…and according to Keith Olbermann, Schumaker was irked as well.
Even though Topps is the official card, players do not have any approval rights over the image Topps selects. I think if Alfredo Simon had his choice, I would hope he would object to how poorly his card is photoshopped, considering it looks like he has a shrunken turtle head.

And there are other photoshopped things that are irksome. The Jesus Montero rookie card’s helmet has fake sun spots/distress marks/ink blotches on it; and I’m unsure what was done to the Alex Avila card, but  all aspects of the card are photoshopped to a degree that he looks like a computer drawn rendering of himself. He is SimCity Avila.
Some of the cards look closer to the classic formula, but of the five packs I purchased, the bad seems to outweigh the good. The bigger question (which has no evident answer): has Topps changed to an unbearable level or have I just outgrown my hobby?
The larger commentary, should be that opening these new packs did not really bring me the happiness they once did. Of course, I was excited for the handful of rookie cards, tJon Lester, and Sergio Santos card, but in general there was no thrill or rush that had once been there.
I think I will continue with the tradition of opening a vintage pack of cards on Opening Day, but the purchasing of the new cards seems to be over. We will see if it sticks.