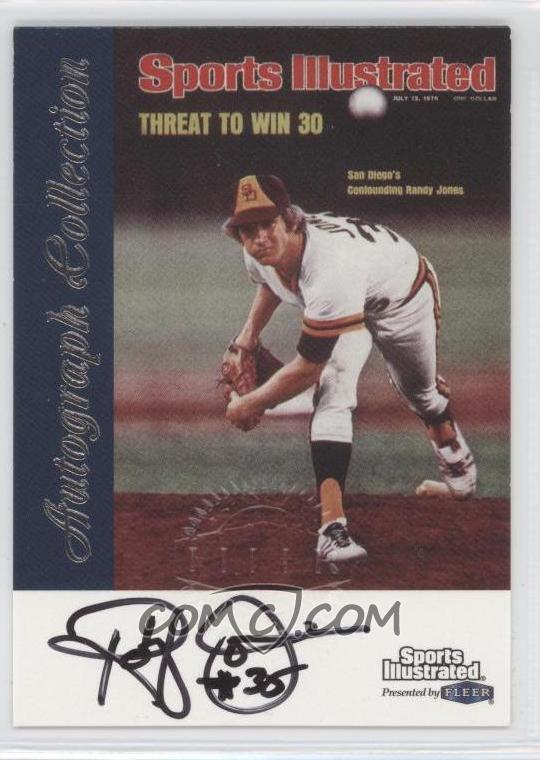 The National League gave out ten Cy Young Awards in the decade of the 1970s, as you’d probably expect. Eight of them went to players who were now in the Hall of Fame: two to Tom Seaver, two to Steve Carlton, and one each to Bob Gibson, Fergie Jenkins, Gaylord Perry, and Bruce Sutter.
One of the other two was Mike Marshall, the rubber-armed reliever turned kind of crazy kinesiologist doing scary things with young pitchers’ arms, who appeared in a record 106 games in relief in 1974 — 13 in a row, at one point — and pitched 208.1 innings, all in relief, gathering 15 wins (with 12 losses) and a league-leading 21 saves.
The tenth one, you’ve probably guessed, was Randy Jones.

Jones, who for whatever it’s worth is the first player I’ve ever come across who has a nickname listed on Wikipedia (“Junk Man,” which definitely fits) but not Baseball-Reference, was drafted by the Padres with the first pick of the fifth round of the 1972 draft, out of the relatively nearby Chapman College, and was in the Majors by the middle of the following season.
Both of his first two Padres teams went 60-102; Jones had a promising half-season with the first, but the second was a disaster. On a team with a young Dave Winfield and an old Willie McCovey and what one assumes would be a terrible defense (they get a -91 by Total Zone, with three different players in negative double digits), Jones went 8-22, leading the league in losses, with a 4.45 ERA (80 ERA+). Nowadays, though, he’d be touted as a breakout candidate as soon as the Padres got a defense; his FIP was just 3.58, roughly the same as it had been in ’73.
And sure enough, in 1975, the Padres improved by eleven games, improved their defense per Total Zone by nearly fifty runs (though it’s not clear how; they were basically the same team), and Jones put up what was almost certainly his best year, with a 20-12 record and league-leading 2.24 ERA (and an also-league-leading 156 ERA+) in 285 innings. His strikeouts actually fell by more than two per nine from the year before (to an unheard-of-these-days 3.25), but his walk rate fell almost as much (to 1.77), and he gave up about a home run for every two full games. He finished a distant second to Seaver — who put up a slightly worse ERA and ERA+ in slightly fewer innings, but got two more “wins” and three fewer “losses” — in the Cy Young race. Jones did win the “Comeback Player of the Year” award, somehow, even though it was his first good season and he was still only 24.
1976 was Jones’ Cy Young year, but 1975 was almost certainly better. By rWAR, Jones went from 7.7 to 5.1 and by WARP, 8.0 to 5.6, although by fWAR, he actually improved, 4.3 to 4.6, with similar ratios in 30 more innings. But while his innings went up to 315 and he led the league in starts (40), complete games (25!) and, most importantly for the voters, wins (22), his ERA went up by a full half run, the ERA+ dropping to 120. His strikeouts took another dip, to a perfectly ludicrous 2.65 (which, while crazy, isn’t as rare as I’d assumed: here’s a list of the best seasons, by rWAR, of pitchers to have put up less than 3.0 K/9 since 1950). There were fewer strikeouts overall then, of course, but that’s still barely half of the league’s average for starters that year (4.82).
So how does a guy nicknamed “Junk Man,” who struck out essentially zero people, succeed to the point of a Cy Young runner-up and win (and a pair of 10th-place MVP finishes, interestingly) in consecutive years? Jones had a “fastball” that only rarely broke 80 miles an hour, which in itself (plus his being a lefty) tempts comparisons to Jamie Moyer. Those fall short, though, because Jones’ secret was not a changeup, but his sinker, which tended to actually travel a bit faster than his “fastball.” His sinker has to have been devastatingly effective; it’d be great if we had the data to show his ground-ball percentages from those two years.
Jones has said that the fastball and sinker were essentially his only pitches, but two sources in The Neyer/James Guide to Pitchers — his catcher Fred Kendall and a nemesis, Keith Hernandez — disagree, citing his slider as another reason for his success. Here’s what Hernandez had to say, taken by Neyer and James from Pure Baseball by Hernandez and Mike Bryan:

Perhaps more common than the hard sinker ballers are pitchers like the former Padre Randy Jones, a left-hander with a sinker that traveled in the low eighties–not hard at all, really, but that pitch broke late and sharply and killed the league. Right-handed batters lost patience, chased after it, and missed it every time. Finally some manager had the bright idea of going against the book by stacking his lineup with left-handed hitters to go against the left-hander Jones. Unheard of! But the sinker broke into their favorite hitting zone. Jones retaliated against left-handed batters with a good, sharp slider that he could break over the outside corner.

So what Jones did, he did with what must have been an incredible ability to induce ground balls, and almost equally incredible control, with a walk rate in 1976 (1.43) considerably less than half of the league’s average. He was the modern Twins’ idea of the perfect pitcher, essentially.
So that was Randy Jones at the end of 1976: not yet 27, coming off one 20-loss and then two 20-win seasons, posting a 2.50 ERA in almost exactly 600 innings over the latter two, with a Cy Young win and a runner-up. Sadly, on his last start of the 1976 season, Jones injured his arm in a way that required surgery. He went back out for the start of the ’77 season, but he was ineffective, and had to miss about six weeks with another injury from mid-June through all of July. That was a wasted year, and he could justifiably have won the Comeback award in ’78 (13-14, 2.88, 115 ERA+ in 253 innings), but he just wasn’t the same pitcher after the 1976 season, getting by on luck and guile when he got by at all. He put up below-average years with the Padres through 1980 and then with the Mets, as a part-timer, in 1981 and ’82, and then he was out of baseball after that, at age 32. He finished with a sub-.500 won-lost record at 105-123, making Jones (per Wikipedia and my perfunctory Wikipedia-confirming review) the only Cy Young Award-winning starting pitcher in history to finish his career with more losses than wins.
Since his retirement upon being released by the Pirates in Spring Training 1983, Jones has served as a coach, and owns a catering business. His number was retired by the Padres in 1997, an honor he now shares with Steve Garvey, Tony Gwynn, Dave Winfield, and Trevor Hoffman. He’s just fourth among all Padres pitchers in rWAR, falling behind Hoffman, Jake Peavy and Andy Ashby. But, you know, fourth in line for a team that’s now 43 years old isn’t too bad.
Jones turns 62 today. Happy birthday, Randy!