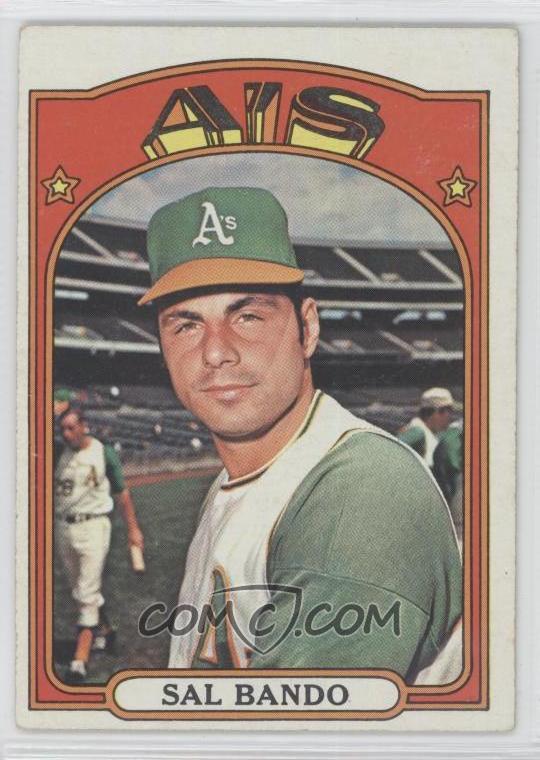 As a birthdate, February 13 suffers from a shortage of great players — Bando’s 242 career homers are more than four times as many as #2, and no pitcher amassed 50 wins or 500 strikeouts — and is largely devoid of current players, so it’s not likely to get better any time soon.

What it’s not missing, though, is interesting stories. Tragic figure Donnie Moore would have turned 58 today; villainous figure (and just plain terrible baseball player who nonetheless got to play for 15 years) Hal Chase was spawned 129 years ago on this date.

If you’ve read this, though, you know I have to pick Bando to talk about today, who, along with a slew of more or less equally excellent third basemen, is one of the most underrated players in baseball history. Bando woke up this morning as a brand new sixty-eight year old.

Bando was drafted in the sixth round of the 1965 draft out of Arizona State University by the Athletics, when they still played in Kansas City (but past the period during which he would’ve been shipped to the Yankees the moment he showed any promise). His minor league numbers ought to give Jeff Bagwell doubters something to think about — he put up decent batting averages and good OBPs, but slugged just .413, with a homer about every 40 at-bats. They moved him quickly nonetheless, however, and when the A’s debuted in Oakland in 1968, the 24 year old Bando was the team’s third baseman for all 162 games.

That was, of course, the worst year for hitters that anyone alive today remembers, and to the A’s credit, they weren’t discouraged by his ugly .251/.314/.354 (which, in that year and that park, was good for a 108 OPS+) and nine homers. Thanks to holding his own in the pitchers’ paradise and his average defense at the hot corner, by rWAR, Bando was still worth 3.2 wins.

As solid as that performance was from a near-rookie, in context, it doesn’t really prepare you for what he did next. Over the next five years, from 1969-1973, by rWAR, Bando was the best position player in baseball. (By fWAR, he falls all the way to third, behind two inner-circle Hall of Famers.) In ’69, Bando suddenly found his power, hitting 31 homers. He also more than doubled his walks (45 unintentionals to 106), and raised his batting average 30 points, putting up a .281/.400/.484 line (153 OPS+) and playing excellent defense, racking up 8.9 rWAR. Bando wouldn’t quite hit 31 homers again, and wouldn’t reach 8.9 WAR, but he remained an elite player over the next four years, hitting for power, drawing plenty of walks, and playing good defense at that underappreciated, key position. He dropped off a bit after 1973, mostly in his ability to hit singles and doubles; he kept hitting 15-17 homers and drawing plenty of walks, putting up a still very solid average of 4.7 rWAR per season, from 1974 through 1978. In that period, he made just four All-Star teams, but got MVP votes in seven different seasons, including a single finish in each of second, third and fourth place (in 1971, ’74 1n ’73, respectively).

He fell off quickly after that, suffering through three more partial years with the Brewers. That stretch alone, I submit, should be enough to get him serious Hall of Fame consideration. Bando was arguably the best player in baseball for a five year period (and if he wasn’t, he was neck-and-neck with two all-time greats), and continued to be an excellent, All-Star level player for five more. That ought to get you into the conversation. Judging by his 0.7% showing in his one year on the ballot in 1987, however, it didn’t.

And then consider this: as you probably know, the A’s won the World Series every year from 1972 through 1974. They sandwiched that between Western Division championships in 1971 and 1975. So most of Bando’s peak was spent on one of the great dynasties in baseball history. He performed well enough, but not brilliantly, in the postseason itself. By itself, I don’t think that’s worth a ton — so he happened to be on some good teams. He was the best player on most of them, but still, giving him credit for their greatness would be giving him credit for his teammates. I don’t like to do that.

On the other hand, though…you often hear those 1970s A’s teams brought up in arguments over chemistry. In terms of chemistry, those teams were, like, nitroglycerin. They had some incredible egos on those teams, they fought each other, they fought with their owner, and so on. If those teams could win, the argument goes, any team can win, “chemistry” be damned.

I’ve made the same argument myself sometimes, but I do think motivation and leadership are things that matter — they’re just not things we can really quantify and appreciate from the outside (and I think they can be damned hard to quantify and appreciate properly from the inside, too), so it’s more of an argument that we should ignore those things, not that they don’t exist.

So in that context, consider: Bando was, unquestionably, the leader of those teams. He was officially named captain, and there are plenty of accounts to the effect that the team(s) coalesced around Bando, in the absence of other effective leadership. It’s a lot of conjecture and such, of course, but what if Bando really was the glue that kept that team from falling completely apart? Wouldn’t that be worth pushing him from “borderline” to “in”? I’d think so.

I’d like to see him in anyway, of course (and Graig Nettles, and Ken Boyer, and Buddy Bell). Third basemen (and especially good third basemen, since there are some truly awful HOF 3Bs) simply need to be represented more than they are. But I think Bando’s contributions to those great, volatile Athletics teams is worth giving some thought to.

What’s not worth giving some thought to, on the other hand, are his seven years as Milwaukee Brewers GM.
Much of Milwaukee will never forgive him for letting Paul Molitor walk as a free agent in ’92. But he was a very, very good ballplayer — for at least five seasons, a truly great one — and deserves to be remembered as such. Happy birthday, Salvatore Leonard!