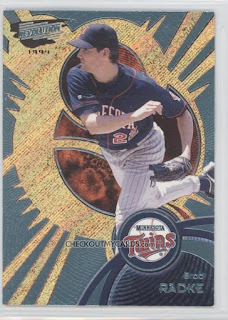 By Bill
I spend enough time criticizing and arguing against writers with actual votes, and urging voter openness, accountability, and so forth, that it seems only fair to give my own thoughts on the year’s BBWAA Hall of Fame ballot. (Do it every year: here’s 2010, here’s 2011.) Besides, it’s fun. With the big announcement coming up in a week, this is likely to be kind of Hall of Fame Week (or Two Weeks) here at TPA, so this seems like as good a way as any to kick it off.

I’m a big Hall guy. More accurately: I think that, for all the (justified) ribbing it gets, the Hall has established a pretty definable standard after more than seventy years, and that standard should be maintained. That’s not at all to say that anyone outside who is better than anyone on the inside should get in; there are numerous clear mistakes, like Chick Hafey, Freddy Lindstrom, Jim Rice and Bruce Sutter, who just aren’t any part of the standard. But if you’re close to the average Hall of Famer — that is, better than about half the guys who are already in — I think you belong.

Two years ago, I “voted” for seven guys; last year, I used up all ten slots. Three of my ten are now gone, in one direction or t’other — Bert Blyleven, Roberto Alomar, and Kevin Brown (frowny face) — so I figure I might as well go through the whole ballot top-to-bottom again.

In addition, later this week, I’ll bring back my piece from last year that takes a look at otherwise eligible candidates who didn’t make the ballot, so check back for that.
Here’s the full ballot:
Jeff Bagwell: Yes, of course. Our position on Bagwell around here is pretty damn well documented.

Jeromy Burnitz: No, though there was a three-year stretch or so in there (1997-99) in which he was a lot of fun to watch hit.

Vinny Castilla: No. He’s got one vote, which is good. His hitting was vastly overrated thanks to Coors Field and his inability to take a pitch, but a roughly average hitter and good defender at third base isn’t worthless, as some of his detractors seemed to act like he was.

Juan Gonzalez: No. Good hitter, even a great one a couple times (but never deserved an MVP). Not so terribly different from, and arguably better than, actual Hall of Famer Chuck Klein.


Brian Jordan: No. If he’d come to baseball full-time a bit earlier (rather than spending three years doing double duty with the NFL and not becoming a full-time MLB player until age 28) and stayed healthy, then who knows? He had two very-good-to-great years, 1996 and 1998, around an injury-wrecked 1997, the year he was featured on the cover of EA’s Triple Play video game series)

Barry Larkin: Yes. I’m almost sure he’s getting in this year. It’s a shame he’s had to wait this long.

Javy Lopez: No, Really good player. 33rd greatest primary catcher of all time, according to rWAR (right between New Ulmer Terry Steinbach and Victor Martinez), and his 2003 was the 20th-best season ever, with the second most homers (43) of any catcher, behind Johnny Bench’s 45 in 1970.

Edgar Martinez: Yes. I had a long Twitter talk with real-life voter Jeff Fletcher about this a few days ago, and I’m all talked out, but yeah, Edgar had an all-time great offensive peak and belongs. These guys do a better job of it than I could anyway: Grant Brisbee and Bill Petti.

Don Mattingly: No. You can’t make an argument for Mattingly based on comparisons to any but the very worst existing Hall of Famers. People who vote for Mattingly are nostalgic and/or really like the guy, and are voting based on what might have been.

Fred McGriff: No. Every year I come pretty close to saying yes, but then, every year I get just a little bit further away. Yes, he was victimized by his era, starting to get old right when offense was exploding, but even considering that, he’s really not more deserving than Jason Giambi or Carlos  Delgado. Or Norm Cash or Gil Hodges. So, no, and I think I’m firm on that now.

Mark McGwire: Yes. Of course. I don’t consider myself a would-be dispenser of vigilante justice who wants to punish McGwire for a wrong which wasn’t against the rules, to which he admitted and apologized, and which may not have made all that much of a difference anyway, so, yes.

Bill Mueller: No. Hey, you could do a lot worse than a .373 career OBP and excellent defense. rWAR has him as the second most valuable position player on the brilliant 2003 Red Sox team — better, thanks to playing time, position and defense, than Manny Ramirez and David Ortiz.

Terry Mulholland: No. Only above average a couple times. You have to respect anyone who hung around for twenty seasons, and I certainly think anyone who does deserves a place on the ballot (and maybe even a courtesy vote or two).

Dale Murphy: No. Nothing new to say about Murphy. Six pretty great (but not, like, Bonds-great) seasons and nothing else.

Rafael Palmeiro: Yes. I left him off last year because I ran out of room, but Raffy’s absolutely deserving. You might argue that he was never great, but he was very good for a very long time, and that’s always been enough (see Paul Molitor, Eddie Murray, Dave Winfield, etc.). Unless you’re Lou Whitaker.

Brad Radke: okay, um, wait for it, Yes. I’ve been consistent on this: there’s nothing at all wrong with throwing a guy you really liked a courtesy vote, so long as there are fewer than ten actually-qualified candidates. I’m only pegging eight legitimate candidates this year, as you’ll see, and Radke is one of my favorite players of all time, underrated and tough as hell. Also the owner of a better career rWAR than Morris (41.4 to 39.3)…which isn’t anything like an actual Hall of Fame argument, but still worth noting.
But, yes. I would do this very rarely — maybe once a decade? — but without having to leave any deserving candidates off and with no doubt in my mind that Bradke fails to clear the necessary 5% to stay on the ballot no matter what I do, I absolutely would throw him a “yes” vote.

Tim Salmon: No. But I hope a couple old Angels reporters do for him what I just pretended to do for Radke. Very comparable in rWAR to the aforementioned Klein and Rice, and fellow Hall outfielders Lou Brock and Hack Wilson, and much better than Hafey or Lloyd Waner.

Ruben Sierra: No. As I noted in this post on Bill James’ 1994 Hall of Fame predictions, James had Sierra going into the hall in 2017. He was already in the middle of his rapid, early decline when James wrote that, though, and never recovered. An incredible talent that never really grasped pitch recognition and then completely fell apart.

Lee Smith: No. I’ve said before that I’d put Mariano Rivera and Hoyt Wilhelm in, and I’d think about Trevor Hoffman, and that’s it for relievers. Smith was, for a few years, one of those old-school closers who could give you a hundred innings…but then, the only reason he’s considered a candidate is that he was able to pile up saves in the later years as the proto-new-age closer (with three seasons of over 30 saves in under 60 innings), so to me, that’s a wash. He was good, but not particularly close to being a Hall of Famer for me.

Alan Trammell: Yes. If Barry Larkin belongs (and he does), so does Trammell. Probably should have been named MVP in 1987, and had an argument for it in ‘84 — certainly a better argument than his teammate Willie Hernandez had — in which case he probably makes it years ago. They’re jobbing him now in part because they jobbed him then. Life just ain’t fair.

Larry Walker: Yes. As I noted last year, every eligible outfielder with more rWAR than Walker is in the Hall of Fame. That (like OPS+, and fWAR, and WARP, and wRC+, etc.) adjusts for the Coors Effect, and all those things still suggest Walker is worthy. He was a great hitter who happened to move to Coors during (a) the offensive explosion and (b) his prime years, which made his numbers look even greater than they were; either way, still great. Good range, good baserunning, and an unbelievable arm, too.

Bernie Williams: No. Smart people can make and have made good cases for him — here’s one, possibly Insider-only — and center fielders certainly are underrepresented in the Hall. I just don’t think he quite measures up. All the metrics agree he was dreadful defensively, which gives him arguably one great year, and not nearly a long enough career to get in on very-good alone. I’m OK waiting for Jim Edmonds and Kenny Lofton, and maybe Andruw Jones and/or Carlos Beltran, before I start lobbying for the Hall to do justice to CFs.

Tony Womack: Ha! I’ll get into this in my guys-not-on-the-ballot post, but there are like a million guys who played 10+ years, retired in 2006, and have better claims to appearing on this ballot than Womack had (one travesty in particular). Just an awful, awful player. But stolen bases are fun!

Eric Young: No. I liked EY a lot as a player, more than I would have if he’d ever played for a team I had a rooting interest in; leading the league in caught stealing twice and finishing in the top ten ten times are bad things…but if you’re not rooting for the team they happen to, they just make for an exciting, all-out type of player. Young had real value, too, an average 2B with good on-base skills. Not close to the Hall, of course.