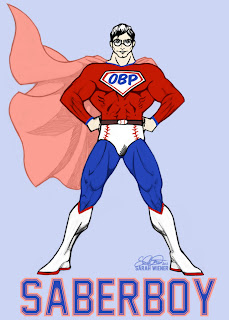 I was going to make a whole “manifesto” out of this: the key principles of SaberBoy’s view on the baseball world. But I wasn’t making it funny enough to come off as intended, and I don’t take myself nearly seriously enough to do it straight. So I’ll just stick to the one most important point.

By now, if you’re reading this, odds are you’ve already gotten a glimpse (at least) of the whole “SaberBoy” thing. If not, the internet has you covered: it’s wrapped up pretty well by Stuart Jones here, by Steve Gardner of USA Today here, and by Craig Calcaterra at NBC Sports here, and our very own Mark has a profile of the new hero right here. Sarah Wiener designed the logo to the right, and has T-shirts and other stuff for sale. Craziness, all of it. Certainly not what I was expecting to come out of a Monday that started with us announcing our departure from ESPN. In the span of 24 hours, thanks pretty much entirely to the new name and avatar, I picked up something over 250 new Twitter followers. That was a lot of fun.


There’s a pretty obvious danger in a superhero character named SaberBoy, though, and I think it’s fairly well outlined (as I read it, at least) in a comment by one of my favorite tweeters and casual baseball-related acquaintances:

Indeed, most of the torrent of initial jokes centered around the new superhero making the world safe for [tired statgeek cliches] against his arch-nemeses [traditional mainstream sportswriter] and [Jack Morris or Jim Rice or Tim McCarver]. Lots of the lines were really funny. Mark had a few right here. There’s a line in my Twitter bio that gives a similar impression — a crusader to battle the BBWAA and bring them into line.


But that’s not what it was about, though. In fact, I think it’s kind of the opposite of what it’s about.

The reason I got such a kick out of Miller’s comment — and I’d like to think it’s the reason most other people did — was that right now, in 2012, it’s absolutely absurd to use a made-up slur like “Saberboy.” Most mainstream writers now are also bloggers. Most are at least aware of most of the key sabermetric concepts and many of the stats, and a great many even put them to use, to varying degrees. I’d argue that the stat geek side has, by and large, taken similar, if smaller, steps toward the middle, recognizing that we don’t always know everything, for starters, and acknowledging the importance of things like scouting.
In the context of that world, the idea that one particular writer (an NHL writer, it’s worth noting, who keeps himself intentionally and kind of proudly ignorant about baseball and what the Hall actually is — a far different animal from someone like Jon Heyman, a smart baseball guy who just happens to be kind of poor at analysis) thinks that “Saberboy” is a good idea is just funny, made even funnier by the fact that it’s not wOBA or WARP or SIERA that draws the “SaberBoy” label, but rather OBP (hence the emblem on SaberBoy’s chest), and the idea — now pretty uncontroversial — that it’s a better stat than batting average.
SaberBoy, the superhero, is a parody of the us-vs.-them, good-vs.-evil world of 2002 (per Kevin; I’d go as late as 2007, but whatever) in which Miller apparently thinks we still live. Which is why all those lines about SaberBoy and his arch enemies Heyman and Chass were jokes. Heyman is not my enemy, certainly, and neither is Miller, or any of the suspected plagiarists (well, one is, but that’s a totally different issue).
To the extent SaberBoy stands for anything at all (and he probably doesn’t), it’s about acquiring knowledge, acknowledging uncertainty, and challenging traditional ideas. But that’s giving the whole idea way too much credit; it’s mostly just about being kind of funny. Which involves a little making fun of silly thinking, of course (like this beauty from early this morning), but not crusading against the people who espouse those traditional ideas and deepening the divide between “bloggers” and “journalists” or what-have-you. Rather, more than anything, it’s about poking fun at that divide. Which I think is pretty much why it’s funny.