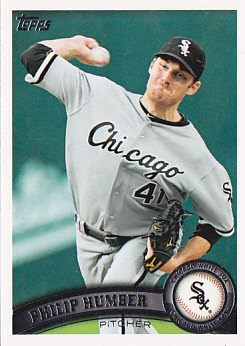 Philip Humber made baseball history yesterday, when he set down every single Mariners batter he faced in the 21st Perfect Game in baseball history.  Humber is in exclusive company that includes Hall of Famers John Ward, Cy Young, Addie Joss, Jim Bunning, Sandy Koufax, Catfish Hunter, and (eventually) Randy Johnson. But the truth of the matter is that this club has gotten far less exclusive since the 1980s. Indeed, between Joss’s gem and Charlie Robertson’s in 1922, 14 years past. After Robertson, it would be until 1956 before Don Larsen pitched his perfect game in the World Series, a 34 year layoff. Then there was an eight year lull until Bunning and Koufax did it in back-to-back years. After Koufax, there was a 16 year break. Since 1981, when Len Barker secured his immortality, the rate of perfect games has been relatively steady, with a new one coming every 3-5 years. 1981, 1984, 1988, 1991, 1994, 1998, 1999, 2004, 2009, 2010 (twice!), and 2012. Look at the following chart to get a sense of the dramatic increase:

Why?  Obviously we don’t have any definitive answers.  It’s probably partly a function of opportunity (there are more games played today with longer schedules and more teams in the game) and skill (pitchers strike out more batters today than at any point in league history and defensive players have gotten bigger and faster).

Still, Humber’s gem is pretty impressive, even against a low-octane offense like the Mariners.  Obviously, we don’t know how the M’s will finish out the season, but they’re likely to be well out of contention in a top-heavy AL West.  Counter-intuitively, of the 19 perfect games since 1900, nine have come against clubs with a winning record. You’d think, of course, that teams who get utterly dominated in this way would tend to be poor overall. The overall winning percentage of teams getting blanked is .496 (1,386-1408) thanks to an epically bad Mets team that went 53-109 and got shut down by Koufax. Two of the opposing clubs ended up in the World Series. Obviously, one of these is the Dodgers club of 1956 who Don Larsen victimized in the World Series. The other, the 1988 Dodgers who were stopped by Tom Browning, also made it to the series, and won.

The Dodgers are the current record holder for most times being blanked in a perfect game, as they were victims in the aforementioned ’56 and ’88 games, and also in 1991 against Dennis Martinez. The Rays join the Dodgers and the Twins as the only teams to have laid down for 27 straight batters more than once.

Of course, there were several players in the Rays lineup who played in both perfect games. BJ Upton, Carl Crawford, Evan Longoria, Carlos Pena, Ben Zobrist, and Gabe Kapler each played all of both games, getting six trips to the plate each. That said, they are not the first players to be shut down twice. Catcher Ossee Schreckengost played in both of the first two perfect games in the 20th century, getting five at bats (and being pinch hit for in the second game). Not surprisingly, Ossie wasn’t much of a hitter and had a .199 and .247 OBP in ’04 and ’08 respectively. But none of these players is close to touching the record for most at bats in a perfect game for a losing team. That honor is held by one of the great all field-no hit shortstops of all time. Alfredo Griffin actually got into three perfect games on the losing end, including twice as a leadoff hitter (Griffin had a career .285 OBP, and had just a 59% stolen base percentage across 18 seasons. The low point was 1980, when he stole 18 bases, but was caught 23 times.). Griffin had eight at bats in these three games, but was mercifully lifted in the 9th for pinch hitter Stan Javier in 1991.

While their lineup’s OBP was considerably higher (.324), the ’64 Cubs offered probably the easiest lineup that allowed perfection. While Billy Williams and Ron Santo pumped up the overall performance of the group over the course of the season, the Cubs started two players who did not get on base in 1964 (OF Byron Browne and P Bob Hendley) and one player (OF Don Young) who got on base just twice in 36 plate appearances. These three offensive sink holes got 8 of the 27 at bats in the contest. As such, their expected OBP in that game was around .230. Koufax easily mowed them down.

That said, if the 2012 Mariners continue on their present course, they would undoubtedly unseat both of these clubs.  The team’s .272 OBP is fourteen points lower than any other club that’s been on the receiving end of perfection.  And the lineup’s expected OBP that day was .270.  We probably should expect the Mariners to improve at least somewhat, however.

The toughest lineup to pitch a perfect game against was undoubtedly the ’22 Tigers, who rookie Charlie Robertson (making just his 3rd big league start) blanked for one of his 49 career victories. The Tigers boasted Ty Cobb (.462 OBP, easily the highest OBP of any player who was shut down in a perfect game), Harry Heilman (.432), Lu Blue (.422), Topper Rigney (.380) and Bobby Veach (.377). When their pitcher (Herman Pillette) was due up in the 9th, the Tigers sent Johnny Bassler (.422) up to the plate. The lineup’s OBP for the year was .383, and should have had a .363 mark in the game. By a wide mark, the Tigers were the best lineup to ever be set down in order. Still, they couldn’t match Robertson.

The M’s pinch hit for both their 8th and 9th hitters yesterday, in an attempt to get anything going against Humber.  Some might argue this was poor form, and that, out of respect for a potential historical accomplishment or whatever, Eric Wedge should have played it straight.  For the record, any suggestion that teams should not be using every method at their disposal to get on base  is ridiculous. In the past, The Common Man has heard criticism when managers send up pinch hitters or try to bunt for a hit in a no hitter. There’s some ridiculous notion that that’s part of an “unwritten” rulebook. That’s ridiculous. For more than a century, from Cy Young’s perfect game against the A’s in 1904 until Roy Halladay’s perfecto against the Marlins in 2010, teams had used pinch hitters in perfect games, and not just for the pitcher. The White Sox used three pinch hitters against Joss in 1908. The Mets also used three against Jim Bunning in ’64 (fat lot of good it did them). In the DH era, the Blue Jays still pinch hit for their 3B and C against Len Barker. The Expos used two pinch hitters against David Cone and the Yankees in ’99, despite playing in an AL park. Of the 17 post-1900 perfect games, only four times did managers not go to their bench. Only Marcel Lachemann (’94), Tom Kelly (’98), and Joe Maddon (’09-’10) played it straight, and likely did so either for platoon advantage or because their bench was weak.  And really, when one of your pinch hitters is Brendan Ryan, can you really make an argument that Wedge was trying to gain an advantage?

Humber may not end up being as good as the other pitchers on this list. He’s still fourteen career wins behind Dallas Braden to get out of last place on the list of 20th and 21st century pitchers who have pitched perfect games. But given his history as a failed prospect, getting handed around from team to team, and finally finding a home under the tuteledge of Don Cooper, he’s going to be a fun pitcher to root for, even if he does pitch for the White Sox and the Twins let him go for nothing. And The Common Man will be sure to be watching on Thursday, when he gets a chance to go Johnny VanderMeer agains the Red Sox tough lineup.

Note: Parts of this article were taken and/or updated from this 2010 article by The Common Man.