Introduction
A few months ago, I created a database that includes all of the prospect rankings from Baseball America, Keith Law and Kevin Goldstein. I didn’t have a direct purpose for it, I’m just the type of person who likes to accumulate as much data as possible. So it sat around on my computer until I found a good use for it. Well, thanks to fantasy baseball and Starling Marte’s horrible 3.8% walk rate in AA last season, I have. Marte is a possible target in my dynasty minor league draft and I wanted to see what other prospects had poor walk rates and how successful they were in their careers.

Method
In interest of saving digital space (and your scrolling finger), I will only post the full method on the Rookie and Low-A edition of this series. 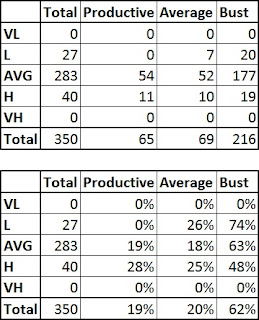 No single prospect with a low Advanced-A walk rate turned into a productive MLB hitter. Nearly three quarters of them were busts. Players with high walk rates had a bust percentage of only 48%.

Correlation to MLB
This graph shows the correlation between Advanced-A walk rates and MLB walk rates. 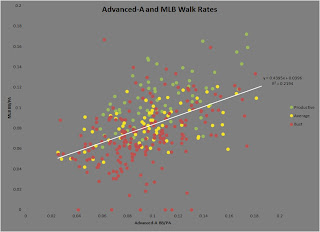 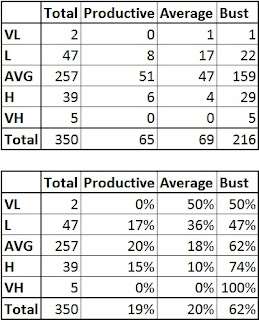 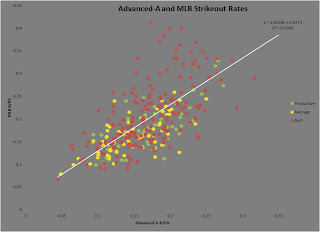 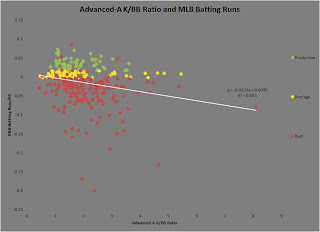 Conclusion
The correlation between Advanced-A and MLB strikeout rates is much higher than for walk rates, meaning a player is much more likely to stay a high-strikeout player at all levels. A player with a low walk rate is much less likely to succeed in the big leagues. These two are probably related. If it is possible for a player to succeed while striking out a ton, there is no reason for him to improve in that area.