While watching Daniel Day Lewis accept yet another Oscar award on Sunday night for his performance in Lincoln (really, when he's nominated they need to create a Best Actor Not Named Daniel Day Lewis category), I wondered about the other Abraham Lincolns out there, specifically the baseballing ones. Especially with political cartoons like this one now filling American textbooks: (Library of Congress by way of New York Times)
Firing up the ole Baseball-Reference machine, I searched for Abraham Lincoln and was mildly shocked at what I found.
Three ballplayers, all named Abraham Lincoln, and all Major Leaguers. Nary a minor leaguer in the bunch and all having wrapped up their playing careers by 1921. While there may have been a handful of minor leaguers who never earned the right to have their middle names recorded, we'll simply have to assume they never existed. Also, dear Mothers of America, why did you stop naming your children after the Great Emancipator, instead looking to the Aidens and Braydens of the world?
Sadly, despite the Abraham Lincolns success at reaching the Majors, they would never last very long, perhaps the blessing and curse of their namesake.
The first, Abraham Lincoln Wolstenholme was born in Philadelphia on March 4, 1861, his name probably having nothing to do with that being the date of Lincoln's first inauguration or that Lincoln had just left Philadelphia on a secret train in the middle of the night amid assassination concerns. Sadly, Wolstenholme's career would be shortlived, a poor choice of words in an Abraham Lincoln piece, getting 11 at-bats as a 22-year-old catcher for the 1883 Philadelphia Quakers, collecting only one hit, a double. The Quakers did have a mess of other problems beyond Wolstenholme though, with their ace and second baseman, John Coleman, going 12-48 on the mound with a .234 average and 82 OPS+. Sadly, there is nothing else we know about Wolstenholme's life, though we do know he's buried in the North Cedar Cemetary in Philadelphia should you ever wish to visit.
The second of the presidential ballplayers, Abraham Lincoln Wade was born on December 20, 1879 in Spring City, PA, a date of no importance so far as I can tell. Except that the Carbon Advocate tells us that on this date T.D. Clauss sells boots cheaper than any man in town. And that's important info to know.

(image via Baseball Prospectus)
Of course, this Abraham decided to go by the name Ham, something I cannot quibble with given ham's delicious sweet and salty flavor. Unfortunately for Ham, he would appear in only one game for the 1907 New York Giants, making two putouts and being hit by the pitch in his only at-bat. It's a feat he shares with only three other hitters. There would have been one more in that grouping had it not been for Adam Greenberg and his campaign to strikeout against RA Dickey. 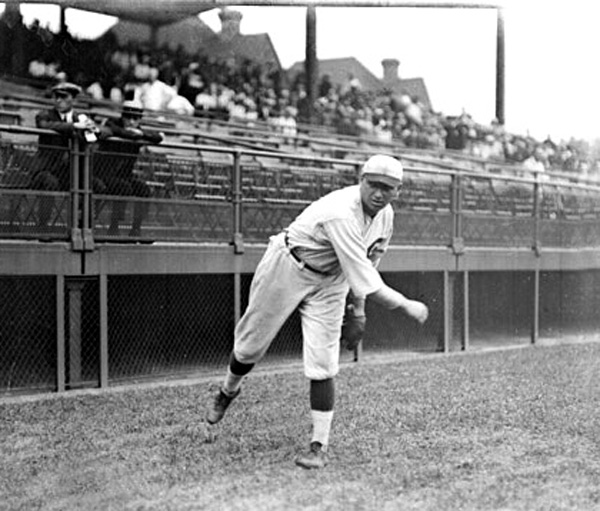 (image via The Deadball Era)
Our last Abraham Lincoln is Abraham Lincoln "Sweetbreads" Bailey born February 12, 1895, sharing a birthday with Old Abe himself. As for why Abraham Lincoln Bailey decided to go with the much less presidential monicker of "Sweetbreads" we'll never know though I hope it was in an epic, Man Vs. Food-esque sweetbread-eating escapade that he earned the name. Sweetbreads did have the most illustrious Major League career of the three Abe Lincolns, pitching for parts of three years from 1919-1921 with the Chicago Cubs and Brooklyn Robins, posting a 3.15 ERA in 1919 despite issuing 20 walks and striking out only 19 batters. Those are some Aaron Cook numbers.
While we know little else about Sweetbreads life, like Abe Wolstenhome, we know where Sweetbreads is buried. Rumor has it that on every February 12th an unnamed man comes by and leaves one baseball and one set of barbecued pancreas in honor of the ballplayer. (Note: This is not true, but desperately should be.)
And if you're wondering how the Stephen Douglases, the losers of the Lincoln-Douglas debates, have held up, well, there's one currently bouncing around the Independent and Mexican Leagues with five Stephen Douglases having reached the Majors. Of them, perhaps most notable is Stephen Douglas Rogers, former pitcher of the Expos, and namesake of our champion of Liberty, Captain America.
What this really means is this: mothers of America, name your children Abraham Lincoln. Especially if you want them to have short and unsuccessful Major League careers.
ShareTweet