A week that is meant to be a celebration of the sport of baseball has devolved into mad chaos as a number of controversies have swirled around the Baseball Writers Association of America (BBWAA) and their selections for induction into Cooperstown’s National Baseball Hall of Fame Museum.

Beyond the continued debate over whether players with PED ties like Barry Bonds and Roger Clemens should be honored, writer Dan Le Batard came forward to admit that he ‘sold’ his ballot to Deadspin as a form of protest, resulting in his suspension and loss of Hall of Fame vote in the future.

Today, things got much worse. At a hastily put together press conference, BBWAA president La Velle E. Neal III admitted that Frank Thomas, the slugging first baseman with a 521 home runs and a career .301/.419/.555 batting line had not been selected for induction, rather it was Fran Thomas, a 53-year-old homemaker from Hindsboro, Illionis that was chosen for the honor.

Said a visibly embarrassed Neal, “When we mailed the ballots to over 500 BBWAA members this Fall, we didn’t realize there was a small typo. In the spot meant for Frank Thomas, it actually said ‘Fran’ with the ‘K’ left off. Given that 83.7% of voters chose Fran and that my secretary received zero phone calls alerting her to the typo, we must assume the voters actually voted for Ms. Thomas and not the enormous husk of man that played for the Chicago White Sox, Oakland Athletics, and Toronto Blue Jays during an exemplary 19-year career.” 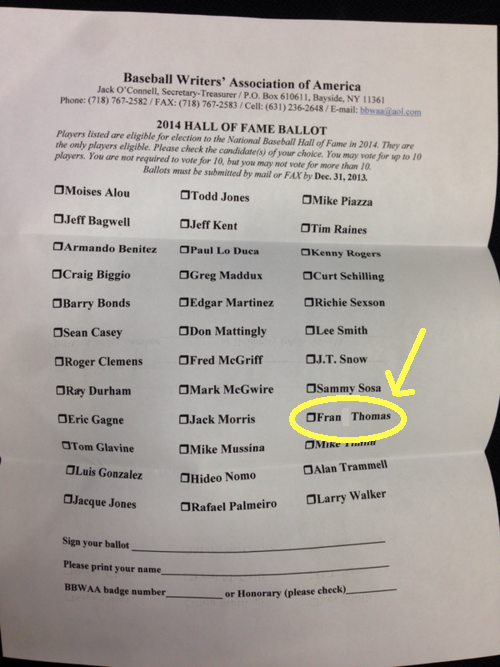 Fran, who once played a game of softball and found it, “rather boring,” said of the election, “Isn’t this an exciting treat! I’ve never been to Cooperstown before, so it will be a fun family trip. I sure am nervous about having to make a speech in front of all those people.”

Frank Thomas, the hitter, who had already made a number of appearances on television and radio offered this terse statement when reached for comment, “F— this s—.”

The BBWAA assured fans that they’ll do everything possible to ensure something like this doesn’t happen again, double and even triple checking the ballots that they mail out. It’s the first time there’s been a problem with the ballot since 2003 when then-President Paul Hagan accidentally mailed out his shopping list for the week.