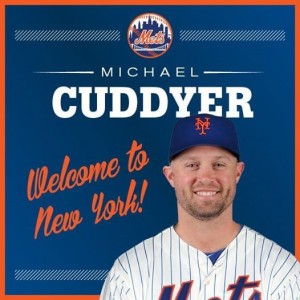 A whole lot has happened since November 10, 2014, when Michael Cuddyer became one of the first notable team-shifting free agent signings of the offseason. You might even think a lot has happened that’d be more interesting to talk about in March than the Michael Cuddyer signing, and you’d probably be right, but to you, I say: start your own damn blog, and then neglect it for nearly two years, and then you can go ahead and write about whatever you want to, K? I’m gonna write about Michael Cuddyer, because I’ve been meaning to for four months, and now I can.

The public reaction to the Mets signing Cuddyer was…strong. Immediate. Confused. The most common refrain, though (see, e.g., 1, 2, 3, 4, 5, 6), was that the Mets were idiots, because Cuddyer was a product of Coors Field whose solid overall hitting lines masked an ugly home/away split, and thus that he’ll fail in a pitcher’s park like Citi. There were other reasons not to like the deal, of course, and those are a bit harder to argue with — he’s aging, he’s always injured, he’s most likely a disaster with a glove on — but that was one that came up quite a bit, and from all corners.

And it’s true: Cuddyer did a whole lot better at Coors than he did on the road, and did better at Coors than he ever had anywhere else. From 2012-2014 with the Rockies, even with a lackluster first season, Cuddyer put up an OPS+ of 126, which is better than any single season he’d had with the Twins, where his career OPS+ had been 111. Moreover, as a Rockie, Cuddyer hit .329/.393/.591 at home — only third on his own team in home OPS, behind Carlos Gonzalez and Troy Tulowitzki, yet fifth in all of baseball — while hitting a respectable-but-ordinary .286/.332/.463 on the road, a line jarringly similar to the overall .272/.343/.451 line he’d put up in those 11 prior years as a Twin. Citi Field having quite a bit more in common with Target Field than it appears to have with Coors Field, it’s a pretty natural assumption that the Mets were buying the guy that shows up in that Twins line and in his road Rockies line…only older, and hurt.

It turns out it’s really not that simple, though — not even close.

As Ted Berg has pointed out a couple times — calling attention to this excellent, more in-depth (if maybe just a liiiiiiitle whiny) post at Purple Row — there’s something funny about Rockies’ players’ road numbers, and there has been at least since 2002. It’s not just that it’s easy to hit at Coors and harder to hit at not-Coors; that would be corrected by numbers like OPS+ and wRC+. But even correcting for park factors, Rockies hitters have historically done worse on the road vis-a-vis their home performance than any other National League team’s.

That doesn’t get us all the way there; that alone could as easily suggest that the various adjustment methods are underselling the Coors advantage. But we have anecdotal evidence that suggests otherwise. Ted quite reasonably points to Matt Holliday. In five years with the Rockies from 2004-2008, Holliday’s home/road OPS split was ridiculous: 1068 at Coors, 803 everywhere else. From there, he had a brief, so-so stop in Oakland, but then moved immediately to tearing it up in St. Louis. Now, in six years away from Coors, he’s put up a 141 OPS+, even better than his 131 in Colorado. His splits, while still pronounced, have slid toward one another in both directions, to .928/.842.

Holliday left Coors as a great all-around athlete, though, and was just 29; Cuddyer is 36, and kind of plodding, certainly less, well, athletic. What occurred to me, though, is that there are actually three guys who meet just that description — talented hitters with limited other skills who hit well at Coors, then left in their mid-thirties. Behold:

That’s…more promising than I would have guessed. The first column above is each player’s OPS+ for his final three seasons with Colorado; next, the difference between his Coors and road OPS while a Rockie; then, his seasonal age for his first year after leaving Colorado; finally, his OPS+ for his first three years (or whatever shorter time he had left) after leaving. This list isn’t cherry-picked: these are the only four hitters who (a) had three or more seasons with the Rockies after age 30; (b) had an OPS+ of 115 or better over those years; and (c) played for a different team after that.

And not one of them did notably worse after leaving the Rockies, despite each having at least as pronounced a home/away split as Cuddyer’s, and despite each being at ages at which we’d expect them to do markedly worse, even if nothing else had changed.

Galarraga had followed a bad year with two good ones to close out his tenure in Colorado; he joined the Braves at age 37 and had the best offensive year of his life, missed an entire year with gol-damn cancer, then came back and had another good year with the Braves and made the All-Star team at 39.

Burks was a bit young for this list, but, like Cuddyer, had performed better (even after park adjustments) with the Rockies than he ever had before. He then went to the Giants and just kept right on hitting, having probably his best year at age 35, then adding on two more very good ones after the window I looked at here.

Walker was a freaking monster, a no-doubt Hall of Famer, and a guy who would probably still be getting it done at age 49 if he hadn’t gotten tired of being so sore all the damn time and hung it up after an extremely solid post-Colorado year and a half (and a World Series appearance) with the Cardinals.

Cuddyer could be a Coors creation; there certainly isn’t enough data here to prove or even meaningfully argue otherwise. Maybe he tailored his swing in such a way as to just perfectly take advantage of Coors, and it won’t translate at all to Queens (he sure doesn’t think so, for whatever that’s worth). He could also be worn down from his injuries and just about done. Or, depending on how much stock you put in the numbers, maybe he’s such a disaster in the field that it doesn’t even really matter, value-wise. That’s all very possible.

What I think, though, as unscientific as it is, is that it says something that no hitter who was a good hitter in Coors (not who put up pretty numbers in Coors, but who actually helped their team — go home, Vinny and Dante, you’re not needed here) and has then gone elsewhere has ever failed to continue being a good hitter at his new place. Maybe Cuddyer will be the first, but I wouldn’t bet on that, and I certainly wouldn’t look at his home/road splits as a sign of it.