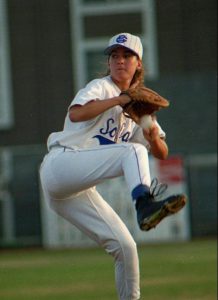 It was 26 years ago this week that A League of Their Own arrived in theaters.

We’re celebrating that this week by talking with special guest Britni de la Cretaz about her brilliant recent article about the AAGPBL and queer women, and about queer women (and all women) in baseball generally.

0:00: Intro; happy birthday, America! Mike isn’t impressed with how you’re aging.
3:00: Britni joins us.
3:43: Britni explains the origins of her article, and how she knew there were stories out there of queer women playing in the AAGPBL.
4:39: Britni gets a text.
7:15: Britni discusses how she developed sources with so few AAGPBL players available, and so many who are still around  unwilling to go on the record; the sweet story of Pat Henschel and Terry Donahue.
11:30: A League of Their Own: what it got right, what it got wrong, and why it also chose not to acknowledge queer player.
24:22: how the (real) AAGPBL dealt with players who didn’t conform to its gender expectations.
28:25: Britni discusses what these players’ lives were like after they left the AAGPBL, and several of the women covered in her article.
35:13: Britni discusses whether things have gotten better for girls and women who want to play baseball, the upcoming baseball World Cup in Vero Beach, and the great Ila Borders.
43:19: Birthdays! Mike tells us about George (better known by an unfortunate nickname) Cuppy; Bill answers at about 48:19 with Lance “One Dog” Johnson.
57:23: Memorials: only one this week–pitcher and longtime Pirates trainer Tony Bartirome.

Key Resources:
Read Britni’s article on Narratively, “The Hidden Queer History Behind ‘A League of Their Own'”
Follow Britni de la Cretaz on Twitter
George “[Nickname]” Cuppy’s SABR bio
Lance Johnson on the ‘pedia, a 1997 Times article by Buster Olney, and a 1996 Daily News article by Thomas Hill.
An article on Bartirome’s passing in The Bradenton Times, and on Kent Tekulve and Bartirome in West Virginia’s WVNews.

That’s all for now. Excelsior!