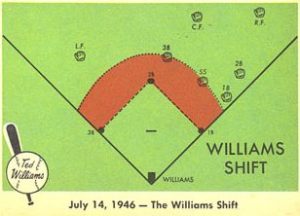 Extreme defensive shifts are all the rage these days–but as I point out in the episode, much like climate change, we’ve been saying that for years, and it keeps getting more true every year. But it was 72 years ago this week that Cleveland shortstop and manager Lou Boudreau debuted the defensive alignment you see to the right–which many people, including its target, viewed as a joke at the time–in a desperate attempt to stop peak Ted Williams.

So we talk about the origins of the shift, and the Boudreau shift, and the modified version of it in the World Series that really kicked it off, and Bill digs into the prevalent idea that hitters (even Williams!) can just “beat the shift” by simply deciding to hit it the other way. Next, we’re joined by research analyst and baseball stats expert Mark Simon, who talks about the modern use of the shift and whether or not it’s working.

Then, for birthdays, we’ve got two really good players you probably don’t know or think much about, and we say farewell to a pitcher who had a bit of a disappointing baseball career, but an interesting life, and made some really odd friends.

0:00: Intro; Bill didn’t make the All-Star team or the Supreme Court; Mike is getting old and needs a snowblower.
2:58: Mike tells us about the original Williams Shift–Cy Williams!
6:00: Mike also gets us to Lou Boudreau and his extreme shift on the more famous Williams.
9:00: Bill takes over; the AL isn’t excited to adopt Boudreau’s crazy idea, but Cards manager Eddie Dyer adapts it for the World Series (so-cleverly dubbed the “Dyer-gram”), and it becomes a thing Williams will have to deal with for the rest of his career; also, why beating the shift might not be as easy (even for the smartest hitter ever!) as everyone seems to assume.
18:49: We welcome in Mark Simon, a friend, listener and professional baseball stats guy at John Dewan’s SIS, who has a ton of interesting information on the modern extreme shift and how well it’s working.
36:39: This Week in Birthdays! Mike talks about the cursed career of Terry Puhl;  at about 41:40, Bill has underrated first baseman, outfielder, and TV broadcaster Ron Fairly (and incorrectly gives his birthday as June 14; it’s June 12. Happy 80th, Ron!).
48:45: Memorial to a not-particularly-accomplished pitcher but a real interesting cat, Mike Kilkenny.
51:10: sign-off; we read some iTunes reviews.

Key Resources:
Joe Posnanski’s 2014 article, referenced by Bill around the 15-minute mark, on whether or not hitters can actually adjust to beat the shift
Jerry Crasnick’s excellent article from this very week in which he interviews Daniel Murphy, Kyle Seager, and Matt Carpenter on the same topic.
Neil Payne on the Boudreau-Williams Shift from FiveThirtyEight.
Mark Simon’s audio and slides from his presentation on shifts from the 2018 SABR Analytics Conference in March.
SABR bios for Puhl, Fairly and Kilkenny.
Follow Mark on Twitter!

That’s all for now. Don’t forget to write!