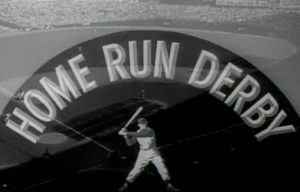 I hate that title.

0:00: Intro; we enjoy the Bermanless derby.
1:20: Mike issues a correction to our episode last week, which gives Bill a chance to talk about the greatest nickname in baseball history.
4:51: Bill talks about the pre-ASG-derby history of home run derbies, and even goes back to the 18th century for the origin of the word “derby”; at about 7:30, a rundown of the classic TV show.
13:00: Mike on the 1985 All-Star Game; strike concerns, a promotion gone so wrong it even made Harmon Killebrew angry, and, at about 16:35, the story of the first All-Star Home Run Derby, which was just a bit different from the modern version.
24:56: Bill on the All-Star Home Run Derbies after the first; rule changes, finally getting the derby on TV and finally getting it broadcast live (both of which took a lot longer than you’d expect), and so on up to today.
32:23: This Week in Birthdays! It’s Mike’s birthday week, and he’s got one of the better players to share his birthday, Pedro (Tony) Oliva; Bill (at 39:50) has Harry H. (Harry) Davis.
47:46: Memorial: Sammy Esposito, the home-grown White Sock of the 1950s and early 60s, who passed away July 9 at age 86.
51:22: Silence! At least on my copy. We’ve since fixed the audio, so if you got the weird silence version and want to hear a nice email we got about the 1980s Astros, download it again!

I’ve heard you can find all 26 full episodes on youtube somewhere–if you haven’t seen them, go do that now (or after you’ve listened to the episode)! See you next week!