Major League Baseball has been a predominantly US affair for years when in the 1950s things started to change. Baseball is the game that Americans are known for. But, as it turns out it won’t be for long that the title would be taken by players of different countries from Latin America. Constantly and steadily players from countries like Venezuela, Dominican Republic, and Cuba are sending in some of the best names in the history of professional baseball. They have improved with yearly lineups for the league as well.

But, how does it affect the future of MLB? It is going to suffer or is it going to shine like a star? While the success so far has encouraged the American people to embrace overseas talents and even forced executives to look overseas for bringing in talented players, the future of MLB looks increasingly international. It cannot be said in a line whether there will be a better position but with current numbers, this is the trend.

As we saw in Major League Baseball lineups for 2020, the US players brought 192 out of 300 while the others came from the rest of the world. The numbers from Latin American nations like the Dominican Republic was the biggest with 35 players. Comparing this with the US, it is nothing at all, but when you compare the complete tally of overseas talent, you see that around 108 were from outside. So, in the future, it is expected to see that MLB will have around 36% of overseas players in the yearly lineups.

This number can increase or decrease, given the political and other scenarios, but looking at the trend, we can tell a couple of things. As the evidence is proving strong with MLB academies, the future of their presence looks strong. Latino nations are going to stay for some time. With thousands of young players from these Latin American countries playing in the minor leagues each year, and waiting for their chance to get selected to MLB, there is no stopping now. To give an idea, MLB currently employs an average of 60 players or so from just the Dominican Republic. And, the state is similar to Venezuela, Cuba, and so on. 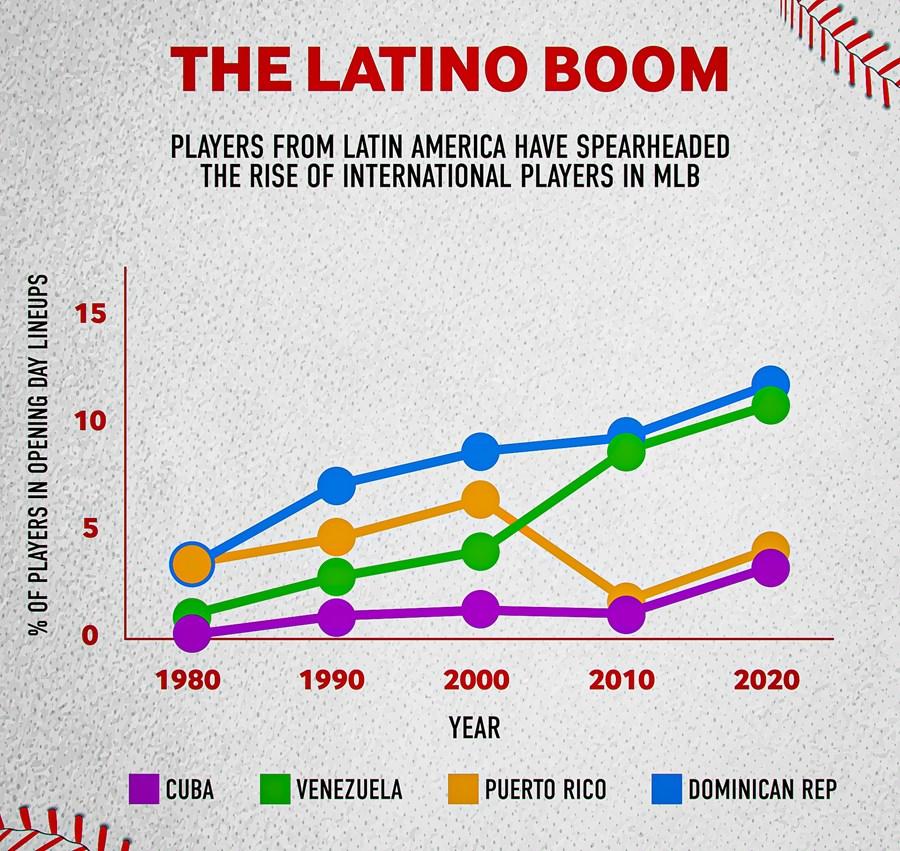 The Popularity of Baseball in America

One thing that comes to notice is that despite baseball being an American game all along, the popularity is going down fast. As football and basketball surpass making the most money, crowd turnouts, and big investors, it seems logical why the shining star is going away from baseball. It shows why Americans are not producing more baseball players to cover the needs and overseas talents are getting the opportunity.

As success is increasing with their presence in the MLB, their future looks bright. This is increasing the chances of future recruits among the Latin American countries, excluding the ones from now. With lucrative TV deals in all places across South America, Central America, and even the Caribbean, such collaborations are only going to ramp up more overseas talent in the future.

As the inclination and popularity of baseball decrease in the US, countries like the Dominican Republic, Cuba, and Venezuela are increasingly getting more and more involved. In all these countries baseball is the No. 1 sport today, and knowing that this was not the case half a century ago. In fact, the 1950s were the times when Major League Baseball didn’t even allow other players to participate in the sport.

The ranking of the US continues to fall with just over 9% of people ranking it as their favorite sport in the US. This is a staggeringly low number. If MLB’s future were to be brought back to the US, something has to happen internally.

Everyone has their favorite sport and unfortunately, the days of baseball are long gone now. Basketball and football have grown increasingly popular today. Not just from TV, media, and movies but also in video games and stuff. In this trend, it is not surprising to learn why the next generation of Americans is not going to be in favor of baseball. And, why the future of Major League Baseball or MBL is certainly better with overseas talent.